I am an amateur attempting to identify every (tolerably sized - see here) living thing in my garden. 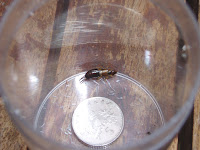 Beneath a pile of wood (at (1.8,2.0) - see here), I found the earwig in photo 1 (click on it to enlarge). Having almost no knowledge of insects, I spent some time browsing books on beetles in an attempt to pin down the Latin species name for my earwig. It turned out this was entirely the wrong approach however, since (as I discovered) earwigs are not in fact beetles at all (in the strict scientific sense of being members of the the order Coleoptera). Rather they are members of the insect order Dermaptera (from the Greek Dermatos: skin; Pteron: wing - "leathery wings")

This led me into something of a digression seeking to get to grips the whole business of orders, genera etc. - words I've seen and read many times but have always been slightly hazy about. You'll want to skip this paragraph if you're not. There are countless places you can turn to get a detailed understanding of this sort of thing (the highly worthy Tree of Life project for example). In my case, I found Insects (G. C. McGavin, Dorin Kindersley handbooks) served me well. In brief: part of the Kingdom Animalia is the Phylum Arthropoda (= all those animals having in common certain gross features -an exoskelton, jointed legs, jointed bodies). The Arthopoda are sub-divided into the Sub-Phyla the mandipulata and chelicerata partly on the basis of whether they have chewing- or pincerlike- mouthparts (spiders, with their pincer-like chelicera mouthparts - see my previous blog posting - fall in the latter). The sub-Phylum mandipulata breaks into 3 Super Classes (the Hexapoda = 6-legs; Crustacea=gills; Myriapodia= millepedes etc.). The super-class Hexapoda next sub-divides into the classes Insecta (wings) and non-Insecta (non-winged springtails etc.). Next, the class Insecta contains 29 orders - examples include the Hymenoptera (ants,bees,waps), Coleoptera (beetles), Dermaptera (earwigs etc.). Below this you get Families, for example the ant family, the Formicidae. The Formicidae are then broken into various ant Genera based on common features (e.g. all those ant species where the waist comprises, say, 2 body segments). Finally, you get the individual species. There are so many insects that as an amatuer you are often doing well if you can get an identification down to the family !

From the Tree of Life project I learn that the order dermaptera (earwigs) comprises 1800 species. The dermaptera seem to those insects that posses two pairs of wings, where the forewings are modified into leathery, stubby tegmina, together with the characteristic unsegmented pincers (cerci) at the end of the body. Gordon's Earwig Page has some more information and a handy set of earwig links.

Much the most comprehensive earwig site I've found is that of Fabian Haas which includes numerous wonderful close up photo's of different species. From the photo on this site I'm almost certain my earwig is The Common or European Earwig (Forficula auricularia).

Despite the fearsome-looking cerci (pincers), it seems the earwig is a gentle creature. It's cerci are quite incapable of having any impact on a person's skin. Earwigs mostly scavenge on leaves and rotting matter and are fairly unusual in the insect world in being doting parents: A female earwig apparently remains with the eggs she lays, carefully cleaning and rearranging them until they hatch. I shall look on my garden's gentle earwigs with a new fondness.
Posted by Henry Walloon at 8:36 AM 3 comments:

After a somewhat lengthy break (apologies dear readers) it is time to get back to the task of identifying all the life in my garden.

Spring has sprung and with it I have begun to realise the size of my self-appointed task: my garden is humming with insects, and plants are shooting up faster than I can catalogue them. I am currently stockpiling photographs in the hope of returning to them during the quieter winter months. Enough preamble, on to today's posting: 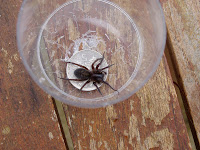 Under some old slates in the corner of my garden (at (1.8,1.5) - see here) I found the spider in the photo left (click on it to enlarge). Based on the beautiful colour plates in my Field Guide to Spiders (Michael J. Roberts, publ. Collins) my indentification for her is Amaurobius similis (the lace webbed spider). Amauorbius ferox is apparantly closely similar. I can't be certain, but I'm going with similis on the basis of my spider's relatively large (for the UK anyway) size: I measured her as 16mm from from front foot to back. A. similis is normally smaller it seems.

Why her? Because, as I learn from book above, male and female spiders can be distinguished by the shape of the palps - the short pair of stubby 'legs' that stick out forwards from the spider's 'head'. Only one palp can be seen in photo 1. Enlarging photo 2 both are clearly visible. The palps of male spiders end in swollen 'bulbs', whereas in females they simply taper to a point (as in photo 2) or sometimes end in a small claw. 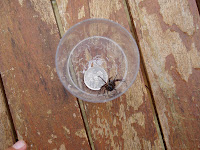 The male palps are designed for 'scooping up' sperm off the web during mating, before depositing it in the female's epigyne, an opening on the her underside. Under magnification the male palps show up as fantastically complicated: an intricate arrangement of hooks, nodules and even in some species inflatable 'balloons', all structures evolved to maximise the fit to the female of the species' epigyne. It seems you can make some progress identifying spiders by their general size and markings, but it seems microscopic examinations of the palp/epigyne is the 'acid test' for spider i.d. Dr Roberts' book is full of meticulously detailed pen and ink line drawings of palps and epigynes. I made some effort with a handlens to examine my female's epigyne, but I wasn't confident to be able to separate similis/ferox, so we'll all have to live with the uncertainty (unless some expert out there can remove it based on the photos ?).

Two other points of interest are visible in photo 2. Firstly the spiders massive mouth parts: the chelicera. These are not themselves the fangs (which are only barely visible in photo 2 at the tips of the chelicera) rather they are crushing mouth parts designed for grinding and chewing as the spider squirts digestive juices onto the unfortunate prey. Secondly, the tiny circle of eyes - I can only convince myself of four in the photo though there should be eight - staring beadily up at the camera.

The common name for A. similis "the lace webbed spider" derives from the extrodinarily fine silk webs it can produce. According to my copy of the Biology of Spiders (Rainer F. Foelix, publ. Oxford Uni. Press - a fascinating read, more in future postings) this may be only one-hundred-millionth of a metre in diameter, so fine that it scatters light and appears blue. This silk is produced from a special array of tiny 'funnels' known as the cribellum situated at the spider's rear. The cribellum accompanies the more familiar silk-producing spinnerets and is not present in all spiders. Members of the genus Amaurobiidae (5 species in Britain and N. Europe) are distinguished by having a cribellum that is sparated into two parts. Spiders with a cribellum also have a tiny array of hairs known as the calamistrum, situated on the hind legs and arranged as a comb. The spider uses this for combing-out the fine silk as it emerges.

Finally, a word about the fate that may await my female. If she mates successfully she will spin a silk 'nest' into which she will lay her eggs and carefully protect them until they hatch. A likely first meal of the young spiderlings will be...their mother. Gruesome stuff!
Posted by Henry Walloon at 7:07 AM 1 comment: