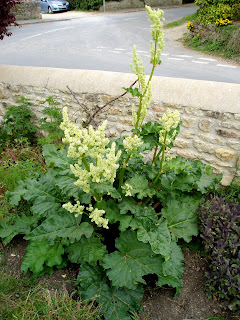 Situated in my garden border (at (0.6,1.0) - see here) is a patch of rhubarb I grew from seed some years ago. Frustratingly for the purposes of this blog, I have since lost the seed packet and can't remember the exact variety - there are dozens - though it may be Hawkes Champagne (is anyone out there expert enough to tell me from the photo's alone?).

Photo 2, which I took back at the start of May, shows a closeup of my rhubarb's flower stalk. For some reason I'd expected the flowers to smell unpleasant, but in fact they give off a sweet, heavy perfume and are very popular with pollinating insects. 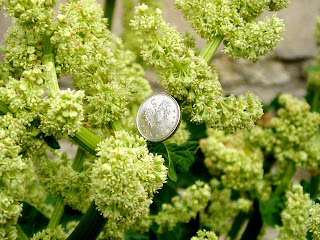 I enjoy my rhubarb mainly for its architectural value in the flower bed, though I do occasionally cook some of the stalks. As everyone knows, rhubarb leaves are poisonous. They contain quantities of nasty chemical oxalates and (laxative) anthraquinone glycosides, and although (as I read here) you might need to eat a few kilogrammes to seriously risk death, eating far less would be enough to bring on some pretty unpleasant consequences. 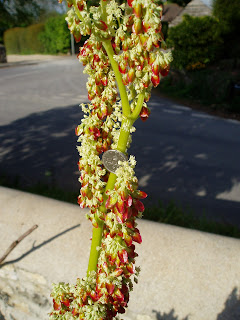 By now, in my quest to discovery something about everything in my garden, I've learnt to expect everything I come across will have a long and remarkable history. Rhubarb certainly lives up to expectations! This site has answers to every rhubarb-related question I could imagine asking (and some I couldn't) and amongst other things I learn that rhubarb gets mentioned in Chinese herbals from 2700BC; that a general in the Ming Dynasty tried to commit suicide by overdosing on rhubarb medicine; and that the famous Marco Polo writes at length on rhubarb in his accounts of his travels. Rhubarb was being grown in Banbury, Oxfordshire (about 15miles from my house) "by Hayward" in 1777 for its herbal value. According to this site, the first English culinary recipe appeared in 1783 in John Farley's book 'The London Art of Cookery', and from the site of the Royal Horticultural Society I learn that in its heyday in the Victorian era, Yorkshire in the North of England was producing 5,000 tons annually. Rhubarb was imported into Maine in the US in the 1790's.

The UK's national collection is today held in the gardens at Harlow Carr. Now, I have nothing but respect for the botanical value of such collections, but I have to confess that the schoolboy in me can't restrain a titter when I bring to mind Python-esque phrases such as "The nation's rhubarb heritage".

Botanically, rhubarb is a member of the polygonaceae family of plants, comprising about a thousand species including sorrel and knotgrass. 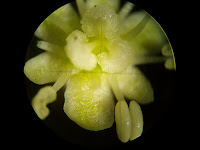 Returning to the subject of my rhubarb's flowers, photo 4 shows a close up of a single flower (40x magnification). Rhubarb flowers have nine tiny white petals. In the centre of photo 4 you can see the threefold 'feathery' stigma, which sits atop the pistil - the female part of the plant. A grooved, waxy pollen-containing anther - part of the plant's male 'apparatus' - can be seen bottom, right-of-centre. 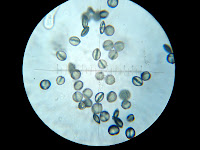 Photo 5 is my photo of some rhubarb pollen. This site gives a detailed botanical description of the polygonaceae and contains a link to labelled botanical drawings of rhubarb flowers.

And finally, in preparing for this posting I was delighted to discover that Ulm, Montana hosts a rhubarb festival . My imagination runs wild! If you're reading this and have attended, please leave a comment to let me just what it is that goes on at a festival of rhubarb!
Posted by Henry Walloon at 4:26 PM 2 comments:

I am an amateur naturalist trying to discover a little about everything living in my garden. 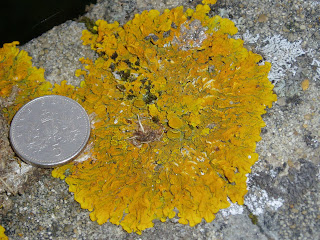 Quietly minding its own business on an exterior concrete windowsill of my house is the lichen shown in photo 1 (click on photos to enlarge). It also grows on the branches of the apple tree in my garden.

My knowledge of the 1854 species of British lichen is extremely limited, but this one, Xanthoria parietina is so common in the UK that it is one I do happen to know.

So what is a lichen? As I discovered recently from reading Lichens (Oliver Gilbert, Collins New Naturalist) this was a question that caused much heated debate amongst 19th century naturalists, with some claiming lichens were plants and others fungi. It turns out that both parties were right: lichen comprise a fungus working "in harmony" with algae (or, in about 10% of cases, with cyanobacteria). The fungus makes up most of the lichen body and is the "stuff" you see when you look at a one. The fungus also takes care of a lot of the tasks associated with water and food storage. The algae (or cynaobacteria) perform photosynthesis i.e. turn sunlight into food. A quote attributed to one Trevor Goward, I came across on this site sums things up nicely:

"Lichens are fungi that have discovered agriculture" 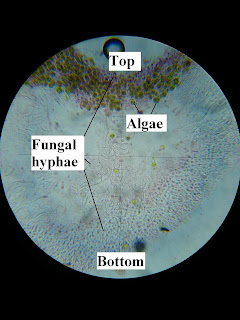 Under the microscope, a cross sectional slice (acquired after no small amount of effort fiddling around with a razor blade at my kitchen table) of my lichen shows things up clearly. Photo 2 (400x, click to enlarge) shows the layer of green algal cells (which I read are algae of the genus Trebouxia in the case of X.parientina) sandwiched between layers of fungus (the various layers, taken from top to bottom, being termed the upper cortex; medulla; and the lower cortex).

So, how does one set about identifying a lichen? Firstly, it's important to know that lichen fall into three main categories: crustose these being the lichens that form patches of negligible thickness like patches of gum on a city pavement; foliose, lichens composed of more visible "flakes" (like the X.parietina in photo 1); and fruticose - little hairy/fibrous "clumpy" lichens that mostly frequent trees.

Next, many lichen are selective about the surface on which they will grow: In particular, some require an acidic surface others alkaline. Putting a drop of lemon juice (=an acid) onto a surface and examining it through a hand lens, if the surface is alkaline small bubbles will be seen forming in the droplet.

A next trick widely used by lichenologists to aid identification makes use of chemical colour tests. Applying certain chemicals (such as household bleach and potassium hydroxide solution) to certain lichens results in powerful colour changes. X. parietina turns bright scarlet in response to 10% KOH-solution for example. As I learn from Dr. Gilbert's book, the complex colouring of lichens results from the presence of acidic crystals that lichens secrete within their body. It seems no one really knows the purpose of these compounds, but over 400 types have been discovered. 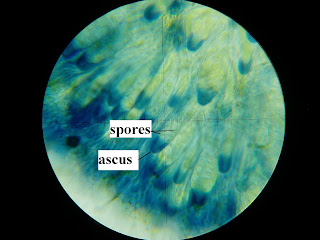 Finally, for the experts, examining a lichen under a microscope can be a strong aid to identification. Assuming some are present, a particularly revealing part of a lichen to examine is an apothecium. Apothecia are the little circular cup-shaped fruiting bodies visible in photo 1. Photo 3 shows a 1000x magnified view of a small section of one of them and reveals it as comprised of numerous asci - little tubes full of spores. The asci eventually burst open, liberating the spores and so ensuring reproduction. It turns out that in response to certain iodine-based solutions (I've used Melzers agent in photo 3) the tips of the asci of different lichen species stain in characteristically different ways (clearly, staining blue in photo 3). The classic book to turn to for details is Lichens:An Illustrated Guide to the British and Irish Species (F.S.Dobson).

This discussion barely scrapes the surface of the fascinating natural history of lichens: there is their extraordinarily slow growth and the great age some attain; the fact that sporulation is only one amongst a variety of ways that lichen have of reproducing; the extreme sensitivity of certain species to air bourne pollution; and the relationships lichens have with other plants and animals. Sadly, space means a discussion of any of these will have to wait for a future posting. Instead, I'll leave you with a quote from Dr. Gilbert's book attributed to A.C.Benson 1904

"Beauty, beauty? What is it? Is it only a trick of old stone and lichen in sunlight?"

I'll have a look at my windowsill and let you know!