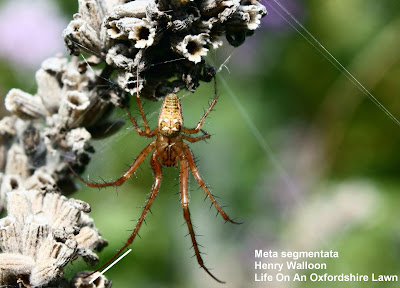 Photo 1, taken late last summer, shows a spider about half-a-centimetre long. Spiders are surprisingly tricky to identify. You might think their often striking colour patterns would make things easy. Unfortunately for many species this is rather variable and the only really accurate approach to identification is to examine your arachnid's reproductive parts under a hand lens. I didn't subject my spider to the indignity of this. From the illustrations in my copy of Spiders (M.Roberts, publ. Collins) however I'm tolerably confident the species here is either Meta segmentata or Meta mengei. Both are common in Britain and look very similar. From the season (M. segmentata is more common later in the year and M. mengei earlier) and from the book illustrations which show M. mengei with a more distinctly hairy lower-leg ('metatarsus I and II' - I've marked these with the white line in photo 1) than my spider appears to possess, I'm going with the identification M. segmentata. 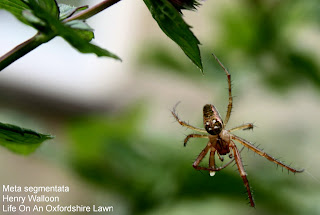 The spider here is a male as revealed by the presence of the two little 'boxing gloves' (the 'palps') emerging just in front of the head. You can see these most clearly in photo 2.

In the course of writing this blog I have learnt to expect that any creature I come across will have some complex and fascinating aspect to its lifestyle. As I discovered from browsing various online papers (1, 2, 3 - references below) M. segmentata is no exception. The mating strategy of male segmenta's is one example of the rich topics for exploration:

If you're a male M.segmentata wanting to mate with a female it does not pay to approach her directly. Do this and its likely she'll eat you! Why it benefits some lifeforms to routinely indulge in cannibalism and others (we human males might say, thankfully) not is a puzzle in itself. Anyway, regardless of the reason, the best chance a male M.segmentata has of mating with a female is to approach her at just the moment she has caught a nice juicy fly and is sufficiently pre-occupied not to eat her suitor. In detail, what males actually do is to approach the female on her web, drive her off her catch and cut the threads supporting the dead fly so that it dangles from a single 'nuptial' thread. The male then mates with the female whilst she attempts to recover the catch.

For the male to be present at just the moment a female catches a fly requires that he sits, sometimes for weeks, watching her web. This is known as 'mate guarding' (in my previous posting I discussed mate guarding amongst dragonflies). Mate guarding for male M.segmentata's is a high energy-expenditure task. Not only may his own food supply suffer, but he is also exposed to challenges from other males who want to usurp his position of guarding a receptive female. (It seems that males know receptive females by the presence of pheromones on her web). The whole question of why it pays males in nature to expend considerable energy to mate is a very deep and rich one in biology (I said something about it in my posting here). An illustration of how subtle things can become is afforded by the studies of Rubenstein and others above (ref.1) on M. segmentata:

Careful studies of colonies of M. segmenta (e.g. on an isolated bushes) show that over a season, a 'size hierarchy' develops with the biggest healthiest males taking over guarding the biggest healthiest females. Once a big male has succeeded in mating with a female, he will move on and find another big female to start guarding. He may need to battle with an already on-guard male to win the right to guard this new female, but being large he stands a decent chance of winning any such battles. In this way big males get to mate with lots of big females and enjoy high reproductive success.

Little males have no hope of winning at this 'roaming' lifestyle however. They would constantly lose the battle to guard large females to larger males. So instead, small males adopt an alternative strategy and choose monogamy, 'settling down' with a single small female. Being small, she herself will normally have been pushed out to an 'undesirable' part of the colony (low down on the bush, say) where prey is scarce. Her small size and poor diet will mean she is not likely to be very fertile (she will not produce a lot of eggs). However, in settling down with her the little male avoids the alternative of a series of fruitless battles over larger females.

So far so good, but now, the question arises: What of mid-sized males? Should they roam, continually seeking large, fertile females to guard but mostly losing them in battles with large males? Or do as small males do and 'settle down' with a single female, but at the cost their mate may have low fertility. In the studies of Rubenstein, 86% of medium males opted to roam. Precisely why the odds stack in this direction doesn't seem to be understood; a nice example of how subtle behaviours can be in the natural kingdom and how there are plenty of topics awaiting further study.

I am an amateur naturalist trying to learn something about everything that lives in my garden. 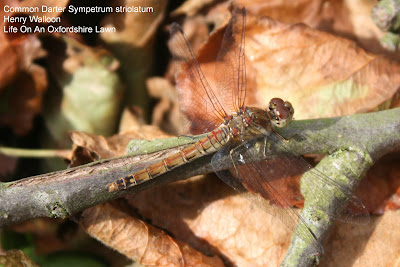 Photo 1, taken back in Autumn shows one of Britain's forty-or-so dragonfly species. Referring to the magnificant colour photos in my copy of Britain's Dragonflies (Smallshire and Swash) I'm confident this is one of the commoner species, The Common Darter (Sympetrum striolatum). The yellow stripes down the legs indicate this one is a male. Adult Common Darters can be found on the wing from March through to earlier December if the weather is mild.

Two dragonflies were present the day I took photo 1. This is the first time I have seen them in my garden. About a kilometre from my house there is a large expanse of wetland however and there, at times, I have seen swarms of several hundreds.

To learn something about dragonflies I have been reading the book of the same name by Corbet and Brooks (New Naturalist Series). I particularly enjoy natural history writing that educates you about not only what is known, but also what isn't. The book is fully satisfying in this respect, concluding each chapter with a section 'Opportunities for Investigation', listing projects of genuine scientific value that any sufficiently motivated amateur might tackle.

The book opens with a discussion of habitat selection: Many dragonfly species are selective over the habitats they will adopt as breeding sites. Some demand flowing water, others still. Some require the presence of certain types of aquatic vegetation. Some will select a pond only if the trees on the bank are below a certain height. Etc. It's hypothesised that an adult arriving at a new location runs through a checklist of 'proximal cues': 'Is it water?' -> 'No', then fly on / 'Yes' then 'Is the water flowing?' -> 'No', fly on / 'Yes', then are there trees on the bank... What the cues are for many species isn't understood however. The fact that adults have been observed being fooled into, for example, trying to lay eggs into a wellington boot (!) suggests one line of enquiry might be careful experimental manipulation of environmental cues to try to work out those that appeal to different dragonfly species.

The topic of reproductive behaviour is a very rich one for study. The authors break things down into the four stages of Recogition (of a prospective mate); Sperm transfer; Guarding Behaviour; and Oviposition. Guarding behaviour is the habit amongts the males of many species (including my S. striolatum) of staying with a female even after she has been fertilised. The males of some species continue to grip the female by the head until she has finished depositing her eggs. Some even 'dunk' the female under water to assist her egg laying into the submerged stems of plants. An advantage of guarding from the male's perspective is that it prevents other males from coming along and displacing his sperm with their own. For the female there are presumed survival advantages: Two sets of eyes are better than one when it comes to spotting predators. Some species even go in for group oviposition, whereby half-a-dozen or more males/female pairs congregate in one spot to lay eggs.

There are a great many opportunities for amateur study concerning the larval stages of dragonflies. Dragonfly larvae go through a number of stages called 'stadia', moulting their exoskelton between each. The stadia for many species however, are simply not known. As the book puts it "there is an urgent need for keys to earlier stadia".

Some species go through all development stages in one year, others 'sit out' the winter in 'diapause', still others have the option to do either. Much remains unexplored concerning the factors that control the development rate of larvae and whether they overwinter or not.

Some dragonfly species lay their eggs several metres from the water's edge. How the first larval stadium (a minute limbless 'tadpole') makes its way from the egg-site to the water is again unknown.

Finally, there are many opportunities for studying the behaviour of larvae - their strategies for stalking different types of prey for example - that any suitably motivated amateur armed with a fishtank and plenty of patience could attack.

There is a great deal more that could be said about the study of dragonflies ('Odontology'). Part of me feels I ought to go on and write more here since I have not seen other dragonfly species in my garden and so may not get a chance to return to them on this blog in the future. On the other hand when I started logging my garden's visitors several years ago I never imagined I would find myself writing about peacocks and budgerigars. So perhaps I can afford to take the risk!
Posted by Henry Walloon at 2:52 PM 2 comments: