I am an amateur naturalist trying to catalogue all the life in my garden.

No, despite appearances to the contrary, I have not gone away! My camera has been kept busy over summer snapping pictures of a host of interesting creatures in my garden and it's high time I resumed the task of writing about them. 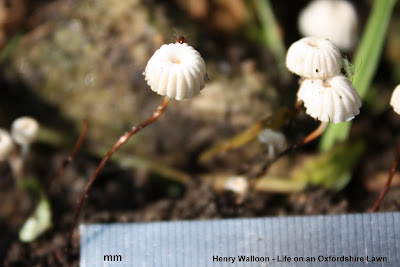 Some weeks ago I was clearing away a patch of weeds bordering my vegetable patch and I came across a troop of the lovely little mushrooms seen in photo 1 (click to enlarge). They seemed to be growing on a lump of decaying wood.

A quick look in my mushroom guide and I'm fairly confident my mushroom is a Collared Parachute Marasmius rotula.

I say 'fairly confident' as Marasmius bulliardii is similar in appearance though I read it is typically somewhat smaller than rotula and grows on leaves . You can find pictures of both, plus various other species, on the splendid Bioimages site and a key to some 60+ Marasmius species on Michael Kuo's site.

Had I gone to the trouble of taking a spore print (see my previous posting here), and assuming my mushroom is indeed M.rotula, I'd have found the spore colour was white. Under the microscope the spores are 7-10um x 3-4um in size and elliptical.

Turning to my copy of the excellent Fungi (Spooner and Roberts, publ. Collins) a nice thing to learn about Marasmius mushrooms is that one of them is amongst the world's oldest toadstools. A Marasimus-like mushroom ('Archeomarasiumus liggetti') was found, trapped in a 90 million year old piece of amber, in New Jersey by one David Hibbett, a Harvard mycologist. The American Museum of Natural History webpage carries a photo and Hibbett's webpage includes a link to his 1997 paper on the discovery ('Fossil mushrooms from the Cretaceous and Miocene ambers and the evolution of homobasidiomycetes' ). 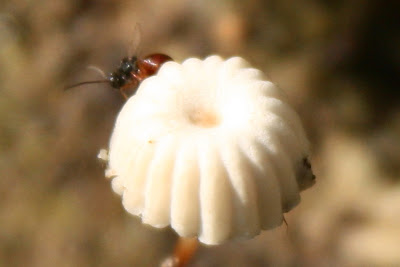 And finally, the exceptionally sharp eyed of you may have spotted a second life form in photo 1, namely the little reddish insect clinging to the cap in the centre. Photo 2 shows a close up of the little critter. Some remarkably complex relationships exists between fungi and insects. The grubs of certain woodwasps for example, though partial to chomping holes in trees, are only able to ingest wood that has been first rotted by a fungus. Adult woodwasps therefore carefully transport this fungus in special grooves on their body and introduce it the same hole as their offspring. My little insect in photo 2 has a superficially wasp-like look about him or her, but his or her true identity and whether he or she has any sort of relationship with my mushroom, or simply happened to be passing through when I took the photo, I have no idea. If anyone of the experts out there can offer any information do please leave a comment.
Posted by Henry Walloon at 1:20 PM 1 comment: