I am an amateur naturalist trying to learn a little about everything living in my garden.

For those of an inquisitive disposition, one of the wonderful things about natural history is its ability to generate an inexhaustible supply of questions one doesn't need to be a professional to either ask or investigate: Noticed something alive!? O.k., so what is it?...and what does it eat?... what eats it?...when does it mates, how does it mates?...You get the idea. 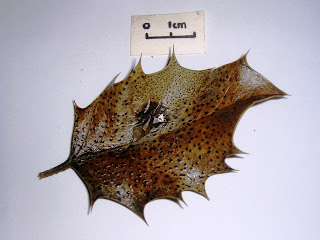 To supply a germane example: In a previous posting on my garden's holly tree, I reported being struck by the small number of creatures reported to derive nourishment from holly's tough and spiny leaves. This started me wondering about what creature might surmount the seemingly even tougher problem of eating dead holly leaves...

...photo 1 (click on photos to enlarge) shows a holly leaf I found in the leaf litter beneath my tree. Photo 2 shows a 100x magnified version of some of the small black dots decorating the surface upper-centre, and photo 3 some of the larger ones covering the remainder of the leaf. 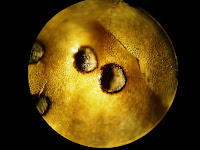 It's perhaps no surprise to learn that the agent of decay of dead holly leaves is a fungus. Fungi are separated into two great divisions ('phyla'), the basidiomycota (=most of the familiar 'mushrooms') and the ascomycota which are typically small, cup shaped fungi (see a previous posting for more details). Clearly photo 2 shows my fungus to be one of the latter. The cup's inner surface (hymenium) is the site of spore production.

In the case of my holly-leaf, a little web searching (specifically of the encyclopaedic bioimages site) suggests the species of fungus at work is Trochila ilicicola. (A smaller question I do have however, is whether the two types of black spots - the smaller dimples of photo 2 , and larger pustules of photo 3 - might conceivably be two different species. Can anyone comment?) 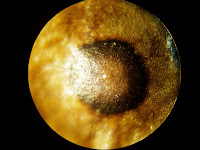 I'm led to understand my cup fungus has a rather neat trick up it's sleeve, namely a hinged lid which it can open when conditions are damp (and hence good for liberating spores), and close when conditions are dry. I didn't get the opportunity to try observing this under the microscope, but you can find some photos on the fine mycolog site.

So there you have it. The next time you take a walk on an late autumn day when interesting natural history might seem in short supply, try picking up a dead leaf!
Posted by Henry Walloon at 8:48 PM 1 comment: