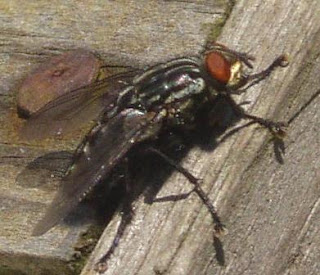 Photo 1 shows a fly I found sunning itself on my bird-table late last summer.

I have no expertise when it come to fly-identification. With the help of the very nice colour plates in my copy of Insects (Michael Chinnery, Collins) however, I'm fairly certain my fly is a member of the Sarcophidae family of so-called Flesh-flies.

In general, identifying flies down to species level is a job for the experts. Page 27 of this book (The Sarcophagidae of Fennoscandia and Denmark, Thomas Pape), partly available online, gives you a flavour of what's involved. Dipterists spend a lot of their time looking at genitalia (!) -that of flies being an important aid to species recognition. I didn't subject my fly to the indignity of this, so can't be confident about its species, though from the book above a guess might be Sarcophaga carnaria (can anyone confirm or correct this?)

There are some 120,000 species of fly (Diptera), with 15,000 occurring in Europe. Chris Thompson's Diptera site contains a wealth of information, including specifics on the Sarcophagidae.Flies are distinguished from other insects in part by having only two wings, their hind pair having shrunk down to vestigial 'stumps' called halters.

There are some 2600 Sarcophagidae flies, about 300 occurring in Europe (this site lists them) and about 60 in Britain. As the name Flesh-fly implies both adults and larvae (maggots) are often associated with carrion, though in fact there is considerable variation in feeding habits across species: some concentrate on small corpses (this site has some closeups of an adult feasting on a dead caterpillar); some larvae are parasites of other insects; some predate snails, others earthworms; some species are able to live on a purely vegetarian diet. Sometimes of course, Flesh-flies become associated with human corpses. As a consequence the Sarcophagidae have been well studied by the science of forensic entomology which aims to get information about the time of a person's death by the rather grisly process of analysing any insects infesting the corpse.

The Sarcophagidae are viviparous (=females give birth to live young, the larvae). This book (Natural Enemies of Terrestrial Molluscs, G.M. Barker) explains this as an adaption to give the flies a speed advantage when it comes to getting their their young established on an ephemeral food item such as a corpse as rapidly as possible.

A final question I am left with is what purpose it serves my fly to sport the "zebra-like" black and white stripes on its back. Can anyone enlighten me?
Posted by Henry Walloon at 5:59 PM 4 comments:

I am an amateur naturalist trying to identify everything living in my garden. 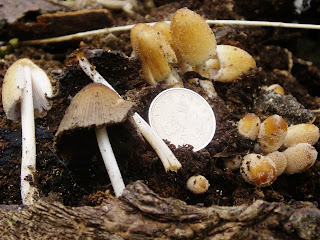 After a goodly absence (apologies dear readers) it's time to return to the task of cataloguing my garden's life.

The first piece of news is that sadly I've had to remove (to my compost bin) a good proportion of the ivy I blogged here. This proved necessary as the sheer weight of ivy caused the collapse of my garden fence! A sad aspect to this is that, as I commented previously, my ivy has proved a popular nesting site with my garden birds (in clearing the foliage this time I uncovered a bird box I had previously stuffed into the ivy, containing an old robin's nest). The good news is firstly that ivy grows so aggressively in my garden that it's certain to recolonise swiftly as soon as I re-erect my fence, and secondly that in clearing it away I came across the subject-matter for today's posting, growing on some old logs: the mushrooms seen in photo 1 (click to enlarge).

I have a little knowledge of British fungi, so I was quickly able to identify my fungus as a Coprinus mushroom. The little "mica-like" flecks on the young caps helped me to identify my mushroom as Coprinus micaceus.

As the great majority of mushroom guides will tell you, there are more than a dozen British Coprinus species, all readily recognised by the characteristic that the whole cap of mature mushrooms "autodigests" and turns into a thick, black, inky, spore-laden liquid, as opposed to the more typical mushroom habit of liberating spores as "dry, airborne powder". You can see "ink" starting to ooze from the mushroom in the centre of photo 1 (the one with its stipe ("stem") touching the coin)...

...Except it turns out the books are wrong! More specifically, although it is true that several hundred mushroom species world-wide share this 'inky' habit, the approach that mycologists have traditionally taken of classifying them all as members of the genus Coprinus seems to be wrong: following DNA sequencing, Hopple and Vilgalys published a scientific paper in 1999, showing that many of the traditional "Coprinus" mushrooms are in fact unrelated to each other (at genus level at least). Worse still, the Coprinus "type species" (i.e. the species most neatly embodying the features of the Coprinus mushrooms = Coprinus comatus) turned out to be genetically rather atypical!

All of this means that mycologists are having to do some serious thinking about how to re-write the textbooks. The current approach is to divide the previous Coprinus genus, into four genera: a small collection of true Coprinus mushrooms and additionally the Coprinopsis, Coprinellus and the Parasola mushrooms. There's a very readable account of all this at Tom Volk's site.

I've known amateur naturalists who get rather heated about splitting and re-naming species, genera etc. on the basis of genetic analyses. 'Species', they say, 'should be defined according to what things look like in the field!'. I don't personally agree with this. To replace one genus with four, superfically identical genera may be inconvenient for the amateur, but at the end of the day if that's the scientific truth of things, I say 'so be it'. Mother Nature isn't obliged to set things up in a way that's convenient for the amatuer and the fact that she sometimes doesn't surely increases the fascination of the studying things?

One final thing that intrigues me is the phrase "mica-like flecks" that all the books seem to use when describing my mushroom, and lends itself to the species name "micaceous". Had I been the first to discover and name my mushroom, I imagine I might come up with "cottony" or "bobbley" to describe the young caps. I doubt the mineral mica, would have entered my head! Just about the one thing I know about mica comes from school physics lessons: namely that that it exhibits a curious optical phenomena known as double refraction (birefringence). You can see a nice photo here. I regret I didn't get a chance to experiment with my mushrooms to find out, but I just wonder whether the flecks on the caps perform any similar "optical magic". Does anyone know?
Posted by Henry Walloon at 3:08 PM 5 comments: