I am an amatuer naturalist trying to learn something about everything living in my garden. 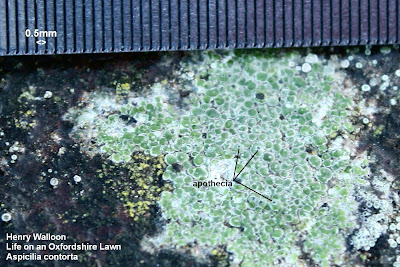 Returning to the iron manhole cover I discussed in my last posting, photo 1 shows yet another lichen eking out a living on the metal surface. From my copy of Lichens (F. Dobson, Richmond Publishing) I'm fairly confident the lichen here is Aspicilia contorta.

The little 'volcanoes' I've marked in the picture are the lichen's spore producing fruits (apothecia). If you're trying to identify a species of a lichen it's worth knowing that apothecia come in different 'flavours', in particular lecideine and lecanorine apothecia. This is well covered in the text books, but I wasn't able to readily locate a picture on the web so I've drawn one myself (I'm no botanical illustrator as you can see!). The difference is in the margin of the fruit body: The margins of lecanorine 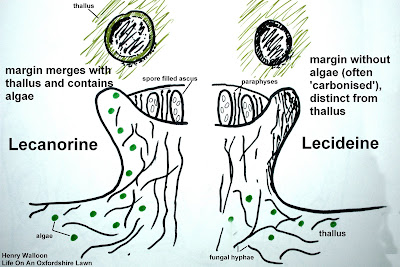 lichen apothecia tend to be the same colour as the main underlying lichen body (thallus) and contain algae. By contrst, the margins of fruits of lecideine lichens tend to appear distinct from the thallus and do not contain algae. The latter are often black (the books sometimes refer to the margin being 'carbonised'. I don't know whether this is just poor terminology or whether the lichen really does manufacture something akin to raw carbon in the margin. Anyone?).

From the description above it will be clear Aspicilia contorta is a lecanorine lichen.

Actually, my efforts to track down a description of all this on web led me to encounter a fair amount of technical jargon surrounding apothecia that had me quite confused at first. To save any fellow interested amateurs out there the trouble of going through the same, drawing two and the description below summarises the understanding I managed to pick up. 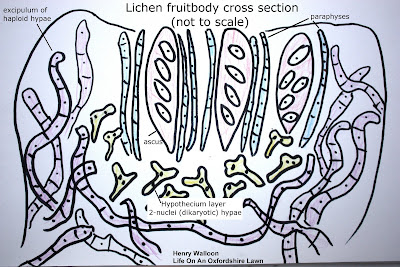 As I'd understood from my previous experiments slicing up apothecia, lichen fuits comprise an array of asci (= little tubes filled with spores). Photo 2 shows a single ascus I managed to separate from an apothecium I took from my garden A. contorta. As shown in drawing 2, the asci come sandwiched amidts a mass of upright fungal threads ('hyphae') known as paraphyses. The specialist textbooks often include pictures of these paraphyses, as they too can help in identifying the species of a lichen.

The fact that the asci are neatly arranged in an upright position is of course, no accident. It's important to the reproductive success of the lichen that when spores exit an ascus, they do so into the open air. There would clearly be no point in having the asci oriented haphardly and liberting a substantial proportion of their spores into back into the walls of the apothecium from where they've arisen in the first place. Of course, this only explains why the asci stand upright, it doesn't explain how they know which way is 'up'. I was fascinated to learn recently however (from a copy of the classic Spore Discharge in Landplants (Ingold) that I was lucky enough to find in a secondhand bookshop) that many cup fungi are phototropic (= sensitive to the direction of daylight), and use this to beneficially orient themselves. The book describes this for various cup-fungi, and I assume it is also the mechanism used by lichens, though strictly, I haven't come across a reference to confirm this (anyone?). 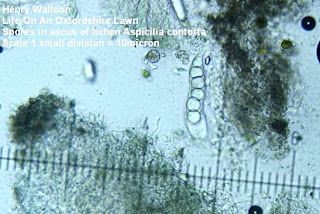 The asci + paraphyses are arranged on a thin layer known as the hypothecium. This comprises a mass of dikaryotic fungal cells, each containing two DNA nuclei. By a complex process of chromosome divison (mitosis) these cells eventually form (single nucleus-) spores. The whole business of sexual reproduction in lichens is complex and there is probably a lot left to discover. The pdf document here has some details.

The outer part of the fruit (technically termed the excipulum) comprises a mass of single-DNA-nucleus (haploid) fungal cells.

So now you know!

Today's has been a rather technical posting and perhaps marks a suitable point to leave my garden's lichens for a while (though I have yet to exhaust them). Outside the first signs of Spring are here: The volume of birdsong is increasing as the breeding season approaches and today on a country walk I spotted my first ladybird of the year (despite Oxfordshire still suffering regular frosts at night), all of which suggests I will not have to look too hard for new signs of life in my garden. Until next time...
Posted by Henry Walloon at 9:40 AM No comments: