I am an amateur naturalist trying to teach myself something about everything alive in my garden. 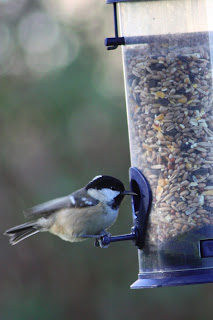 Taken on the same morning as my Blue Tit photo, photo 1 shows a Coal Tit (Parus ater) on my garden birdfeeder.

Averaging around 9-gm, Coal tits are the smallest British tit and easily recognised by their black crown and the white patch at the back of their head: No other British tit has the same. They are common in the UK, often inhabiting conifer woodland, the RSPB website giving the number of breeding pairs as 653,000.

What other I know about coal tits I've learned from reading The Titmice of the British Isles (John A.G.Barnes, publ. David&Charles 1975), this includes the rather charming fact that once mated a male-female pair will tend to remain bonded across the years, assuming both manage to survive that is; Annual mortality for coal tits is around 80%.

I was surprised to learn that coal tits make their nests very near to ground level in tree stumps or even in holes in the ground. I've spent many hours walking through woodland and don't recall ever having seen one, which I suppose must mean they're well concealed. Females lay on average 9 eggs around April-May. Coal tits are diligent parents and have been recorded making upwards of 60 visits to the nest in a single day to feed their chicks.

Coal tits spend a great deal of their day - around 90% - feeding. Given their small body size and slender beaks they consume the smallest insects (typically 0-2mm according to the book above) among the tits, an example of evolution driving different species to specialise in different feeding habitats and foodstuffs to best survive in one another's company. An exception to the rule is beech mast, which is so plentiful in Autumn that many different tit species come together to enjoy the glut.

Something I didn't know is that coal tits will sometimes store food (seeds etc.) for later consumption. Typical hiding places might be holes or under moss on tree trucks. There is a record of one bird digging up a seed that it had hidden more than a fortnight previously.

Finally, I have often wondered about the time at which birds go to bed. Of course 'late in the day', but is that as light is dimming, or say, a little after sunset? Dr. Barnes' book has answered my question: the coal tit is on average an early rooster, typically abed 1.7 minutes before local sunset. Good night!
Posted by Henry Walloon at 9:11 PM 4 comments: 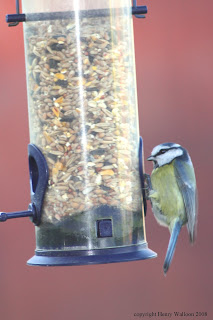 the camera I was fortunate enough to borrow on that occasion. Well, I'm pleased to announce that the birthday fairies have since visited and I am now the proud owner of a fancy digital SLR. I offer this in explanation for why I have spent the greater part of Saturday morning, crouched in a 'birdhide' (a.k.a my garden shed!) my zoom lens trained on my garden birdfeeder.

Blue Tits (Parus caeruleus) are small birds (around 11gm, 11cm), easily recognised by the yellow breast, black eye stripe on a white face, blue crown, and blue and green dorsal (=viewed from back) feathers (photo 2 - click to enlarge). With experience (which I don't have!) it's apparently possible to distinguish males from females by the slightly smaller size and less vivid colourings of the latter.

The Blue Tit's call is a high pitched 'tsee-tsee-tsee' or occasionally a scolding 'churr'. They are one of Britain's commenest birds: The RSPB website gives the number of breeding pairs in the UK as approximately 3.5million.

According to my copy of The Blue Tit (Jim Flegg, Shire Natural History) female Blue Tits normally lay a single batch of between 5- and 16-eggs, during March or April. As with Robins, life is hard, and annual mortality in Blue Tits is around 90%. I had not hitherto realised that predators of the chicks include the Greater Spotted Woodpecker. Late summer and autumn see the highest mortality rates. More happily for my blue tit, birds that make it into Winter have a decent chance of reaching the Spring.

During Spring male Blue Tits defend terretories. During Autumn these break down and Blue Tits join large flocks of small birds roaming the hedgerows. During Winter a sort of 'half way house' emerges with birds forming smaller flocks and confining their travels to smaller (300-400m^2) areas. Again, like Robins, UK Blue Tits tend not to travel any great distance during their lives, <1% moving more than 100km although every few decades climate conditions lead to mass influxes ('irruptions') of birds from the European mainland.

A puzzle about Blue Tits, described in the book above, relates to their dietary fondness for Winter Moth (Operohtera brumata) and Tortix caterpillers. In some years in Oak woodlands, these attain epidemic proportions. Blue Tits seem able to predict (or to state things less anthopromorphically - there is a correlation between) when, and how many eggs to lay to take best advantage of the arrival of the caterpillers. How they do this isn't known, or at least wasn't when the book was written.

Finally, a fact well know to Brit's of a certain generation, which I include here for the interest of overseas readers, was the tradition (now rendered largely extinct by the ubiquitous supermarket) of having milk delivered to the doorstep in glass bottles capped with aluminium foil. It was to a national hazard to find Blue Tits had pecked through the foil to get at the cream below. You can find a photo of this here. Charming at first, but the householder soon learnt to leave empty youghurt pots out for the milkman to place over the bottles to thwart the theives!
Posted by Henry Walloon at 10:16 PM No comments: