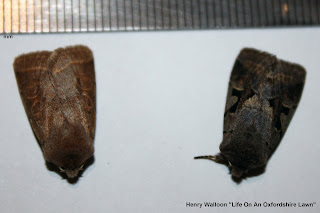 Photo 1 shows two more moths I caught (for the record, on 26th March) in my recently- constructed moth trap.

I didn't know the species of either at first but from my copy of Moths (Waring, Townsend and Lewington, British Wildlife Publishing) it's clear I've found (left) a Common Quaker (Orthosia cerasi) and (right) a Hebrew Character (Orthosia gothica).

I should easily identify them in future: the two, kidney-shaped wing spots of the Common Quaker and the black shapes on the wings of the Hebrew Character are very characteristic.

The Hebrew Character gets its name from the resemblance of its black wing markings to the letters (characters) of the Hebrew alphabet.

I was puzzled by the origin of the name 'Common Quaker' but then came across an article from the Times newspaper 2003, describing an interview with the naturalist Peter Marran. It seems that many of the common names for British moths were made up by members of the The Aurelian Society - one of world's first entomological societies, established in London in the 1760's. According to the article, Quaker's of the time wore (quotes) "subfusc attire" (i.e. dusky or drab clothes). This inspired the naming of not one but three British moths: The Powdered -, The Twin Spot- and (our moth here) The Common Quaker.

Adult of both the Hebrew Character and the Common Quaker feed on the nectar from sallow catkins whilst their caterpillars will eat a range of plants including Oak, Birch and Hawthorn.

An interesting feature of the Hebrew Character I learnt from reading Michael Majerus' book Moths (The New Naturalist Library) is that it displays high latitude melanism; In Northern Scotland, a form of the Hebrew Character - specifically Orthosia gothica f. gothicina - is found that lacks the black colour to the 'Hebrew letters' on its wings. Some other moths, notably the Scalloped Hazel and the Ingrailed Clay, also shows a distinct form at high latitudes. Why? Because, high latitudes impose some unique selective pressures on the moths that live there: firstly there may be issues of thermal regulation (having dark or pale wings will effect how easily a moth heats up or cools down); secondly the low angle of the sun creates softer lighting conditions that may mean birds can more easily pick out camouflage patterns that might work well elsewhere; thirdly, at high latitude in summer the sun does not set - a challenge for the camouflage of normally night flying moths. Low latitude moths that want to 'make the transition' to high latitudes are therefore faced with the need to adapt their colourings or suffer the consequences. A wonderful example of evolutionary change.
Posted by Henry Walloon at 7:15 AM 2 comments: 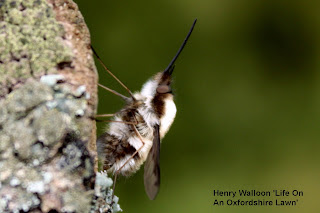 Photos 1 and 2 (click to enlarge) show what must be the most dramatic 'nose' of any British fly.

A quick look through my copy of Michael Chinery's book Insects (Collins) and it appears that I've come upon a Bee Fly (Bombylius major). There are ten British species. B. major is the most commonly observed.

Bee Flies use their 'nose' (proboscis) to probe flowers for nectar. The length arises from their preference for hovering above, rather than actually landing on, flower heads. They do this presumably to avoid being ambushed by 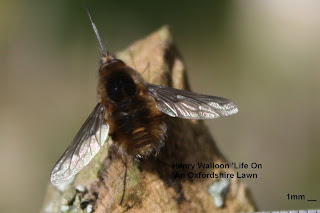 predators such as Crab Spiders that sometimes lurk behind flower petals.

Apparantly Bee Fly's are superb ariel acrobats. I didn't get a chance to observe this however since the one in the photo remained stubbornly perched on the branch of my garden apple tree. We'd had a few warm Spring days here in Oxforshire. On the day the photo was taken however it had turned cold and my Bee Fly was very sluggish (he/she was still on the same spot half an hour later).

I've not found a specialist UK site devoted to Bee Flies, but you can find a key to those of Canada here.

The best general description of Bee Fly natural history I've come across on the internet is that of Louise Kulzer. They have a complex life cycle. As above, adults feed on nectar. Their grubs are parasitic on solitary bees and wasps however. An adult Bee Fly lays it eggs near the burrow of a (true) bee and the grubs, once hatched, find their way into the nest and consume the food intended for the (true) bee larvae. Later, the Bee Fly grub undergoes a 'shape change' (hypermetamorphosis) into a carnivorous grub, and eats the (true) bee larvae.

That at least is a general description. Ideally I'd have liked to have found some more specific details about my species Bombylius major (What types of bee/wasp species it parasitises; How the Bee Flies tracks down a host-bee's nest etc.) but sadly there seem few descriptions on the web. I did find one other site that references a paper by one T.A. Chapman, specifically on the life history of B. major ...from 1878! (I haven't been able to find a copy)

My searches were not entirely in vain. I did come across the studies of Catherine Toft who has written about the ecology of Bee Flies in the Californian Desert, in particular observations on the foraging behaviour of two species. My amateur understandingof her work is as follows:

Back in the late 1960's, one T.W. Shoener argued that, other things being equal, females in nature should seek to maximise the time they spend feeding (on the assumption that taking in more energy through feeding translates into being able to produce more offspring). Males on the other hand should be 'time maximisers' i.e. beyond basic dietary needs, time spent feeding is in some sense 'wasted time' away from looking for, and breeding with, females. Dr Toft noted that two species of Bee Fly (Lorodotus pulchrissimus and L. miscellus) lent themselves very well to a study of this since the two species of fly live in an essentially identical environment, sharing the same desert habitat and even feeding on the same plant.

As it turned out, L.misecellus matched the Shoener prediction: females spent more of their days foraging than males. Males of L. pulchrissimus bucked the trend however. They spent exactly the same amount of time foraging as females. This is apparantly a feature they share with male moose! Although Dr.Toft offers some tentative explanations as to why this might be. The ultimate answer appears to await a deeper study however.

All of which suggests to me, that should you be an amateur naturalist reading this and searching for an amusing but scientifically useful 'project' to undertake in your neighbourhood this summer, you could do worse than to sit in a deckchair with a cold drink and a stop-watch, and time the foraging patterns of that little-known bug in your backgarden!
Posted by Henry Walloon at 2:15 PM 1 comment: