I am an amateur naturalist trying to identify everything living in my garden.

Some time ago I blogged the moth trap I was constructing. My first design was only partially successful (most of my catch were escaping!) and since then my designs have undergo a number of iterations to finally arrive at The Walloon Super Trap you see before you in photo 1! I'm pleased with this design. In fact, the only problem is that the few times I've put it out in my garden it has yielded such a bumper catch of night-time insects I now have a long backlog awaiting a write up on this blog. 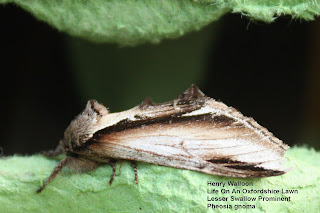 Anyway, on to the stars of today's posting. Photos 1 and 2 show two moths trapped (for the record) on 25th and 22nd April 2009 respectively (I let them go after I'd taken their photos).

A little time spent with my copy of Field Guide to Moths (Waring, Townsend) and I was able to identify the first as a Lesser Swallow Prominent (Pheosia gnoma) and the second as a Coxcomb Prominent (Ptilodon capucina). I'm guessing the various points and fluffy quiffs on my moths are there to resemble thorns and to break up the moths' outline when resting on branches.

The Lesser Swallow Prominent is superficially similar in appearance to the Swallow Prominent (Pheosia tremula) but the neat white triangle on the upper part of the wing identifies my moth as the former. The caterpillars feed on Birch and the book tells 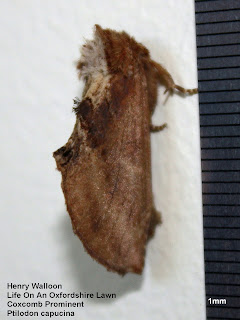 me it is fairly common in the UK.

The Coxcomb is also common. Its larvae feed on a variety of trees including birch, hazel and hawthorn.

My moths are both members of the Notodontidae family of moths of which 27 species have been recorded in Britain (there are several thousand worldwide). My attempts to learn something of them led me to some fascinating online papers about the sense of hearing in moths.

It turns out the Notodontidae moths are notable for having some of the simplest ears of any insect. To we humans, insects wear their ears in rather strange positions - sometimes on the legs, sometimes the thorax and even (in the case of some lacewings) on the wings. This paper by Yager gives a review.

Insect ears broadly follow a common design. A thin membranous 'ear drum' (the tympanal membrane) vibrates in response to sound and the vibrations are detected by structures called scolopidia that are basically stretch receptors. The scolpidia detect movements of the membrane and fire off signals down a connecting nerve. Some grasshoppers have around 2,000 scolopidia. Notodontid moths are at the other extreme with only one.

Yager's paper above quotes the remarkable figure of 1 Angstrom (=a ten-millionth of a millimetre) as the smallest vibration of the membrane that insect ears can detect. If true, I find this truely incredible as 1 Angstrom is about the diameter of a single atom!

I did not manage to find any freely available references to the hearing specifically of my moths, but I have come close with a paper by Annemarie Skurlykke on the hearing of the Swallow Prominent (you'll recall my moth above is the Lesser Swallow Prominent). From this I learn that the Swallow Prominent hears best at frequencies around 60kHz. For perspective, the highest note an adult human can hear is said typically to be around 20kHz. Why should moths be sensitive to such high ('ultrasonic') frequencies? The answer can be summed up succinctly: Bats! Bats are prodigious predators of night flying insects and hunt by echolocation using ultrasound.

I came across a couple of interesting online review articles (by Ratcliffe et.al. and another by Miller and Surlykke) describing how moths and other insects react to hearing an approaching moth. It seems that many moths react in two stages. If the bat is some distance away the moth simply flies away from the sound of the echolocating bat. If the bat gets close enough to strike however, the moth takes more dramatic action such as spiralling in flight or even folding its wings and dropping out of the air. How moths are able to determine the range of the bat isn't fully understood. Bats reduce the time between their ultrasonic squeaks as they get near to striking an insect however in order to better 'see' their prey, and the suggestion is that the moths are sensitive to this increase in squeak-rate. Regardless of how they do it the defence seems fairly successful with those species of moth capable of hearing and reacting to bats improve their survival chances by some 40%.

Of course moths do not get everything their own way. Firstly, diving to the ground is fine...unless (as Guigon and Fullard explain) the 'ground' turns out to be water! Naturally also the bats are not about to take things lying down and have evolved a number of strategies to bypass the moths' defences. Some appear to have adopted frequencies above or below the range of moths' hearing and others may rely to a significant extent on simply seeing (visually) or listening for their prey. Ultimately however, as Miller and Surlykke comment "some barbastelle bats prey almost exclusively on tympanate moths, and just how they do this is not known". Another of nature's puzzles!
Posted by Henry Walloon at 9:29 PM 3 comments: