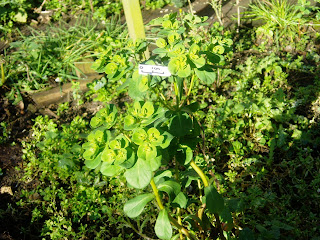 After a series of postings on some of the smaller and arguably more curious lifeforms present in my garden, today's posting features something I suspect most of you will find all too familiar: a garden weed.

Growing in my vegetable patch (at (0.1,1.7) - see here) is the weed seen in photo 1 (click photos to enlarge). It has quite happily survived the British winter frosts.

Working with my copy of The Wild Flower Key (F. Rose, Penguin), I had no difficulty in identifying my plant as a member of the (amusingly named) spurge family (supposedly a word derived from 'to purge' - a reference to the plant's laxitive effect). There are over a dozen British spurges however, so identifying the 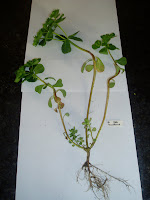 species involved slightly more work, but on the basis that my plant has a smooth (non-hairy) stem; leaves edged with tiny teeth, arranged in alternating fashion along the stem; and a "flower head" (umbel) with five-fold symmetry - together with a few other features relevent to the key in the book above - I'm identifying it as Sun Spurge (Euphorbia heliscopia).

Sun Spurge is normally a single-stemmed plant. Occasionally however, as in photo 2, it may banch from the base (since this plant is a common weed in my garden I felt no compunction in pulling it out to photograph it). 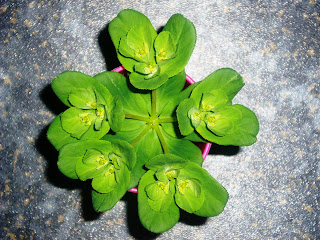 the base of the umbel are known as bracts. The individual 'cups' containing the tiny central flowers are known as involucres.

An obvious feature of Sun Spurge is that the flower-head is almost entirely green. Since much of any plant's effort goes towards harvesting sunlight, it clearly makes sense to pack every available surface with green chlorphyll. What puzzles me is that most plants don't do this however. Instead they use up precious resources producing brightly-coloured flowers, the said purpose being to advertise their presence to pollinating insects (or so I understand). The question I then have however, is why Sun Spurge doesn't need to do the same? Can anyone comment? 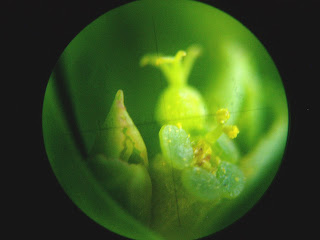 Reminding me of piece of surrealist sculpture from an Yves Tanguy painting, Photo 4 shows a closeup (40x magnification) of one of the tiny flowers of Sun Spurge, peppered with yellow pollen grains. My understanding is that the small, green, plate-like 'petals' nearest to you are nectar producing glands. The round object in the background is the plant's ovary-containing female fruit. The three forked prongs sticking up from it are stigmas. A pollen grain landing on one of these will fertilise the ovary, causing the fruit to swell up, eventually to the point of bursting when it explosively scatters seed over the surrounding soil.

Sun spurge is part of the large Euphorbiaceae family of plants comprising some 7,50o species. The leaves are a favoured food of the caterpillars of the Spurge Hawk moth (a migrant visitor to Southern Britain). When broken, the stem bleeds a milky-white sap and from my copy of Medicinal Plants In Folk Tradition (Allen and Hatfield, Timber Press) I learn that our ancestors used the sap to cure warts. I certainly don't advise anyone try this however since the sap is a serious irritant and worse, a carcinogen. If that isn't enough to deter casual experimentation, as the book describes, one man given a dose 'as a joke' (!) in the ninteenth century:

'ran up and down the street like a madman, and swelled so big that his friends had to bind him round with hay-ropes lest he shall burst'

I promise to return to more sizable and familiar lifeforms soon, dear readers! For today's posting however: another lichen. 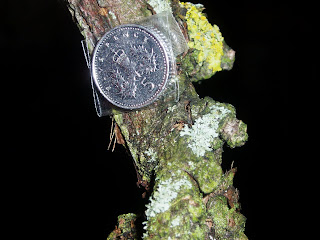 The lichen seen in photo 1 (click to enlarge) decorates many of the branches of my garden apple tree (at (1.2,1.5) - see here) and I'm almost certain (see shortly) in identifying it as Physcia tenella ('it' being either of the two greyish patches below the coin, as opposed to the yellow lichen left of the coin which - though I've not examined it is detail - is probably our old friend X. parietina)

The meaning of the Greek physcia (pronounced 'Fisk-ee-a') seems to be a matter of debate on the internet. I have come across it variously translated as "bellows", "breath-like", "sausage-shaped" and "blister"! Can anyone clarify the true meaning? 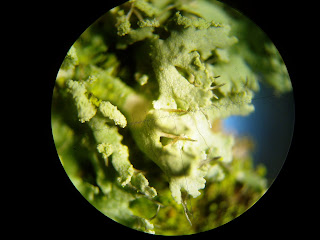 P.tenella is my blog's third example of a foliose lichen. According to my copy of the scholarly Lichens (F.S. Dobson, The Richmond Publishing Co.), Physcia lichens can be distinguished from other foliose lichens, in part, by their narrow (<~2mm) lobes, and septate spores (septa being thin, internal dividing walls - see here for some examples) - though I confess I've not looked for the latter.

Two further distinguishing features of P.tenella are i) the presence of eyelash-like cilia on the edges of the lobes. You can see these in the 40x-magnified photo 2. (Can anyone tell me what purpose it serves to lichen to 'sprout' these?) And ii) the presence of granular soredia (see here for my explanation of what these are) decorating the ends of the lobes. Were I to observe the soredia 'packaged' together inside little 'hoods' I understand I'd be looking at the closely similar lichen P.adscendens (since its not obvious they are, I'm sticking with my identification as P. tenella).

Finally, two nice facts about P.tenella I got from reading my copy of Lichens (O.Gilbert, The New Naturalist series). Firstly, P.tenella is one of three British lichen species favoured by long-tailed tits (Aegithalos caudatus) in building their nests (on average each nest contains nearly 3000 lichen flakes!). Secondly, being fairly acid- and nitrogen-tolerant (not all lichens are), in areas where people walk dogs, P.tenella is one of the commonest lichens to colonise the region marginal to that patch of tree-trunk known to professionals as "the canine zone" . It shouldn't be hard to imagine what this is!
Posted by Henry Walloon at 7:56 PM 3 comments:

I am an amateur naturalist trying to work out all the things living in my garden. 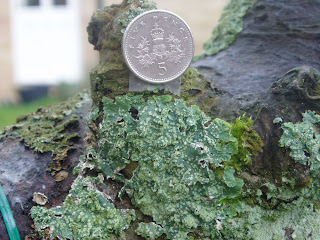 What better way than to start 2008 than with my second lichen (photo 1 - click to enlarge).

As explained in my previous posting, lichens are an organism that comprise a combination of a fungus and an algae. You might expect a curious life form such as this to have some unusual means of propagation and dispersal. In fact, lichens have at least three. The method(s) a given lichen favours can be a handy hint towards identification.

One method by which lichens disperse, as discussed last time, is via spores produced from fruit-like bodies called apothecia. The white bumps peppering my lichen's surface (thallus) in photo 1 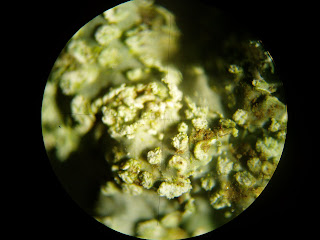 are a second. As photo 2 (40x magnification) shows, these bumps consist of small white granules known as soredia. Soredia are little lumps of lichen (some fungal hyphae and a few algal cells) whose purpose is to flake away, hopefully to land somewhere new where they can set up home.

With regard to reaching a species identification, as I've said before I'm basically a novice when it comes to lichens. Based on the very handy A Key to Lichens on Twigs (Wolseley, James, Alexander) - a leaflet produced by the excellent Field Studies Council, together with a copy of the highly scholarly Lichens (F.S. Dobson, Richmond Publishing Co.) that Santa was generous to deliver me recently, I'm going with the identification Punctelia (Parmelia) subrudecta. I'm not 100% confident in this as the books above describe this species as having a grey thallus, whereas I'd definitely say that in my 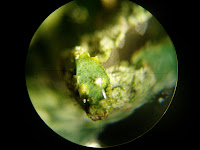 photo is greenish. That said however, the photo of P. subrudecta on the excellent site of the Botanical Museum of Oslo seems a good match. Furthermore, as I mentioned in my previous lichen posting, another handy tip for the identification of lichens is the use of chemical tests: according to the books, P. subrudecta turns red when exposed to a drop of sodium hypochlorite (=household bleach). The reaction was small and fleeting, but as shown in photo 3 (you'll want to click to enlarge), removing a small piece of my lichen and testing it resulted in just such a reaction. In short, I'll stick with identification for now and inmvite the experts out there to correct me!
Posted by Henry Walloon at 2:34 PM 3 comments: