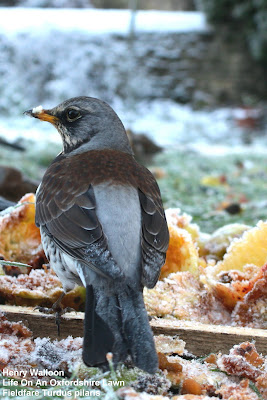 And what better way to enjoy the day than with a photo of one of my favourite visitors to the British garden: the Fieldfare (Turdus pilaris). Photos 1 and 2 show rear and front views (captured using my home-made camera trap incidentally).

I have an apple tree in my garden, which, besides providing a home for various lichens and mosses (not to mention a resting post for beeflies!) yields a bumper crop of cooking apples. So many in fact that that I have given up trying to collect them all and lots are left to lie on my lawn where they fall. They may look a bit untidy but this is more than made up for by the large numbers of Blackbirds, Fieldfares, Song Thrushes and other birds they attract come winter. In my garden, it is not unusual to find fifty birds at a time feeding upon them .

At 26cm in length and 100g, Fieldfares are a little larger and stockier than Song Thrushes (the BTO site has a host of biometric data). They eat invertebrates and berries (and apples!). 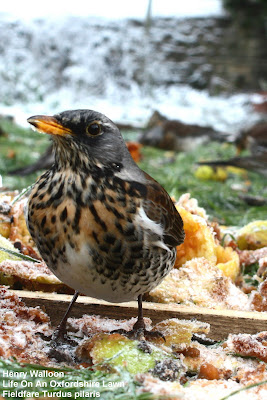 Fieldfares are not really resident in Britain. I say 'not really' since, as I learn from my copy of the RSPB Handbook (Holden and Cleeves) in fact a first British breeding pair was recorded here in the Orkney Isles in 1967. Over subsequent decades the number climbed to a peak of 13, but has since fallen back to less than five pairs a year. Of the population of one million individuals in Britain and Ireland, the overwhelming number are winter migrants, arriving here from late October from Scandinavia and Northern Russia.

Attempting to learn something further about Fieldfares I did a quick internet search and came across an interesting online paper by O. Hogstadt Nest Defence Strategies in the Fieldfare (Ardea 92(1), 79-84) in which the author reports studies of the response of nesting Fieldfares to effigies of crows and stoats - common egg predators of the Fieldfare. The Fieldfare's 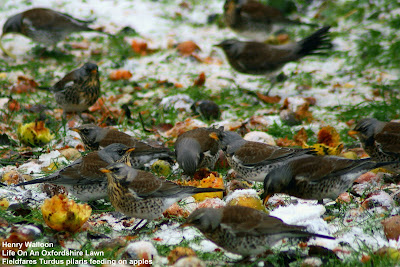 under study showed a distinct and rather well optimised reaction to these two predators. With crows, the reaction was to try to deter the attackers by defecating on them. This makes sense as fecal matter would certainly be detrimental to the performance of a crow's feathers. With stoats however, the reaction of the Fieldfares was to silently slip away from the nest and delay their return - eminently sensible when faced with a predator that hunts mainly by smell and is an equal danger to eggs and adults alike.

To end why not a few lines of poetry. These from the Cornthwaite by the British poet, Norman Nicholson (1914-1987):

Granite and black pines, where the migrant fieldfare breeds
And the ungregarious, one-flowered cloudberry
Is commoner than the crowding bramble.
Posted by Henry Walloon at 9:26 AM

Nice to see you here again. More posts on their way!