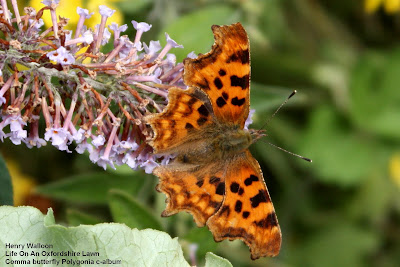 January is seeing heavy snow falls in the UK and as I write there is more than a foot of snow in my garden. To remind us of those balmy summer afternoons during these dark winter days therefore, a picture of a butterfly on the buddleia bush I've blogged previously.

The unusual shape of my butterfly - unique amongst British species - leaves no room for mistaking it as anything other than The Comma (Polygonia c-album).

The species name c-album was a new one for me (I'd not come across a hyphenated Latin name before). The Latin album or alba generally means you should look for some white feature on your animal or plant. All is revealed when you learn that the butterfly carries two distinctive white letter-c's (or white "commas" - if you prefer the English common name) on the lower face of its wings. Unfortunately I don't have a photo but you can find one here.

I read here that male Commas are territorial. They take up residence on a particular leaf or somesuch, ready to chase after anything that flutters-by in the hope it may be a passing female, returning afterwards to the same leaf. I've written previously about the inspirational studies of the great naturalist Niko Tinbergen into the subtle behaviour of butterflies in such circumstances.

In the early 19th century Commas were rare in Britain (see here) possibly for reasons connected with an increase in the practise of burning of hops (a foodstuff of the caterpillars) at the time (see here). Since then however, numbers have grown to the point where the Comma is today relatively common throughout Britain. The caterpillars are striking (see photo here), with markings that camouflage them as birds droppings.

I have frequently remarked (to the point at which I fear I may be becoming a bore on the subject!) that amongst my greatest pleasures in writing this blog has been the discovery that almost any life form I come across, no matter how seemingly commonplace, will turn out to have some unusual and fascinating facet to its lifestyle or behaviour. Take the ability of the Peacock butterfly to emit sounds to startle predators, or the high latitude melanism exhibited by Hebrew Character moths. The Comma is no exception, possessing as it does a somewhat unusual breeding cycle: Adult Comma's emerge from hibernation in March. Eggs are laid, and caterpillars appear from the end of April through to mid-June. It turns out that Comma caterpillars show a peculiar sensitivity to day length. Firstly, it will be obvious that caterpillars appearing early in the season will experience a day-length that is increasing from day-to-day whilst those hatching later experience a decreasing day-length. After a period of growth the caterpillars pupate. When the adult butterflies emerge, it's found that those emerging from the pupae of 'decreasing day-length' caterpillars have dark undersides. These enter hibernation shortly afterwards, to re-emerge in Spring and repeat the cycle. By contrast, adult butteflies from earlier (=increasing-day length) caterpillars are lighter-underwinged and, rather than entering hibernation, go on to breed a second generation of adults before winter arrives. By tracking day-length in this fasion, the species gives itself an improved chance of arriving at winter with a good sized population of adult Commas.

All of this was first worked out by one Emma Hutchinson (1820-1906), who sounds to have been a remarakable lady, being a Herefordshire vicar's wife and 'renowned breeder' of butterflies and moths. There's a nice article about her by D. Jackson in this online edition of the magazine (entitled, appropriately enough, The Comma) of the West Midlands branch of Butterfly Conservation.

Along with hops, British Comma caterpillars will eat nettles. Interestingly, Swedish Commas are far less fussy, being known to feed on plants from seven different plant families. To the professionals this raises intruiging questions about how such dietary variation might be encoded within a species DNA, how it is inherited down the generations, and the evolutionary impacts of such a variation within the one species. P. c-album has been much studied in this regard. A paper by Nylin et.al. (Biol. J. Linnean Soc. 2005, 84, 755) available online here is an example, and explains that dietary prefence in the Comma is encoded on the X-chromosome of the male butterflies.

Finally, my searches led me to an intriguing comment in a paper by Vanhoutte et.al. (J. of. Neuroscience Methods, 2003, 131, p195). The paper is rather technical and I haven't taken the time to follow the details, but roughly the authors set out to study the optical properties of the eyes of various butterflies. As everyone knows, insects have compound eyes made up of hundreds of identical ommatidia (the little hexagonal facets that tile together to form the eye)...

... "identical" that is, until you read in the introduction to the paper above that "recent research has shown that the ommatidia of butterfly eyes can be highly heterogeneous " (=variable)...

...except that P. c-album itself has rather homogeous (=non-variable) ommatidia!

All of which suggests there is more to butterfly eyes than meets the eye. Anticipating future butterfly postings, I've not gone much further into exploring this topic at present, but the few quick searches I've done suggest this is very much the case, with butterflies appearing to have a superiority and variety to their 'apparatus' for colour vision unique amongst insects (there's a review article by Frientiu et.al. here).

And amidst all this talk of fluttering butterflies in summer gardens, what of my garden right now? Answer: -5'C and falling!
Posted by Henry Walloon at 2:23 PM

I enjoyed your dissertation on the oddities of commas. What fascinates me more and more as I get older, and your blog touches on this obliquely, is the amazing complexity of detail in every living thing, Nature's micro engineering is evident in every scale and every bristle.

Fascinating lifecycle - I'll watch out for commas (and the colour of their undersides) with even more interest now.

I get commas here in my yard. So where does one find you species list? I have a fairly good one for out 3.75 acres here in North Carolina USA

Your blog is very good.

Many thanks for the encouragement all.

Spot - I know exactly what you mean. I'm always particularly struck by this when I look at structures under the microscope.

Randy - I haven't made an explicit species list as yet (I'll get around to it at some point), but on the RHS of the main page there is a list of links to all species grouped by type ('fungi', 'beetles' etc.)

saw a comma in my garden 2 days ago.it was enjoying the sunshine !