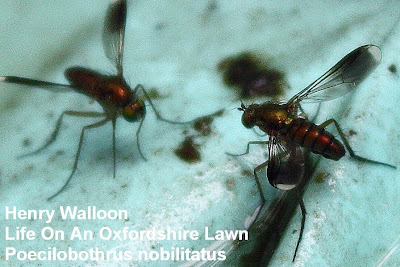 I have a plastic tub in my garden that has become partly filled with rainwater. Passing it last summer, my attention was caught by some flies busying themselves at the water's edge. A closer look revealed some fascinating behaviour: the wings of my flies were characteristically marked and the flies were solemnly raising and lowering them just as might an airport worker guiding a plane to a parking spot with a pair of semaphore flags.

I took some photo's though I confess I rather expected to fail to identify my fly. There are so many species (more than 15,000 in Europe) that to identify an unknown fly can be a tall order unless you're willing to spend hours with a magnifying glass and have access to some serious, specialist literature. Fortunately however, it turned out my fly is not uncommon, its behaviour having been noted by a fair few people, and an internet search led me to the species name: Poecilobothrus nobilitatus.

The stately wing-spreading displays of my fly are part its courtship display. As everyone knows, courtship displays are very widespread in the animal kingdom and can be fantastically intricate (one need only think of peacocks or the dance of Great Crested Grebes (video here)) . It's very natural to wonder what purpose such displays serve. Vast amounts of literature exist on this topic, with a great many unknowns and disputed theories. I don't have anything like the knowledge to comment expertly. My blog is about my learning something of my garden's natural history however, so a few facts gathered from some general reading on my part seem in order:

According to my copy of An Introduction to Behavioural Ecology (Krebs and Davies), the modern view is that, at the deepest level, courtship arises from a conflict between males and females over scarce resources. The point is that sperm are small and energetically 'cheap' to produce. Eggs, however, are larger and energetically more costly to produce and gestate. In the jargon, eggs are a scarce resource. Since eggs are, in this sense 'expensive, high value objects' it is worth males investing effort and energy competing for them. Equally, for females it pays to be 'choosy' when it comes to 'cashing in' the energy investment an egg represents.

The argument above might seem rather abstract, but its consequences are deep. Take the issue of mating with a wrong species: Some species of fruit flies for example, can and sometimes do, interbreed. Often this inter-species breeding results in sterile offspring however. From the perspective above, such parents have wasted precious time and energy. Clearly, it would have benefited them to have had some way to accurately check a prospective partner's species prior to mating. The elaborate courtship dances of some fly species (see here for example) may be just this: a way for females to check whether a male is of the correct species. From the female viewpoint, this avoids wasted energy on improper fertilization of her 'expensive' eggs. From the male point of view, although dancing costs him some energy, eggs are a scarce resource and having found some (i.e. a fertile female) it is worth the investment.

To take a second instance: Since eggs are a scarce resource it is important to lay them somewhere safe and where there is enough food available for the hatchlings. Some courtship displays - such as those where a male presents a female with some 'gift' (say, a morsel of food or a beak-full of nesting material) may be a way for the sexes to share the energetic cost of laying in a particular location (the female pays the cost of depositing her precious eggs; the male pays the cost of finding and presenting a 'courtship gift' that proves the location's suitability).

Yet another purpose of a courtship display may for females to test whether a male is a fit, strong individual, and able to pass on good genes to the egg. Actually, one needs to be a little careful before asserting a given courtship display is about a male demonstrating genetic fitness. To see why, imagine a species of bird that shows-off some glossy plumage during courtship. To say the male is demonstrating genetic fitness, makes an assumption that there exists an (inheritable) gene for glossy plumage for that bird. There may be, but on the other hand there may not. It could be that a male's glossy feathers are nothing to do with his genes but are due to him having been living somewhere that allowed him a good a plentiful food supply. The fact that females are choosing glossy feathers may be nothing (or perhaps only indirectly) to do with a male's genes, but because they say: "Food here is plentiful. It's a good place to breed". The point is not that advertising 'good genes' can never be a reason for a courtship display, simply that one cannot take it for granted as an explanation.

Anyway, in summary, a modern view is that courtship is about competition for resources between males and females. The successful male gets the benefit of the female's energy investment in eggs. In return females get an energy expenditure (=courtship display) from a male that relays something of benefit such as 'this is a good place to lay', or 'the male before you is the correct species', or 'the male before you has 'good' genes', or...(there are lots of other scenarios).

This barely makes a dent on a vast subject of course, and a great deal more could be written on the theory of courtship. This isn't the place to do it however, and instead let's get back to talking specifically about the my fly P. nobilitatus:

The best freely available online paper about my fly I came across was that of Zimmer, Diestelhorst and Lunau which describes the courtship behaviours of eight, so-called 'long legged flies' (Dolichopodidae), mine included. A number of these flies carry display 'badges' they use in courtship. Liancalus virens for example, also has signalling spots on its wings (see picture here). Neurigona quadrifasciata (here) uses foot markings to signal to females.

The paper provides a number of interesting facts about my fly. Firstly, experiments show that male wing span is directly proportional to body size: males with a big thorax also have big wing spans. During courtship P. nobilitatus males work to keep at a constant distance of 2.5cm from females. Taking these facts together, a plausible hypothesis is that female P. nobilitatus flies consider male body size important (as an indicator of a male's health status perhaps). By this argument the male's wing badges and constant- separation-dance are present in order to help females accurately estimate the body size of their suitor by sight.

Another intriguing suggestion in the paper is that males may have evolved signalling 'badges' to allow them to mate on the ground. The idea is this: some species of flies court in flight with males performing aerial stunts or hovering. Presumably these difficult and energetic winged manoeuvres may again allow females to assess health by looking at, say, wingspan. Now, suppose a male could 'con' a female's reproductive senses into thinking she was being presented with a hovering male when in fact both were sat firmly on the ground?! This is not as implausible as it sounds when we remember we are talking about a little fly whose intelligence and eyesight are not necessarily great! The female's reproductive senses may detect the 'beating' wings of a hovering male simply by whether her eyes detect (say) the outline of a wing and certain patterns of light and dark in the space before her. If a male could replicate these patterns whilst still on the ground, he might be able to fool the female's senses into a mating response, and at the same time save himself from the energetically costly business of hovering. The technical term for such cheating is 'sexual mimicry'. The paper concedes that this idea remains unproven for the long legged flies. I hope you'll agree however it's fascinating stuff and it all goes to show just how incredibly rich and intricate are the patterns of life just outside our front doors.
Posted by Henry Walloon at 12:48 PM

Great post Henry! I saw the same flies last year and other than their name, could find very little about them.

Hello Henry. I have only just found your blog via the usual random links from other bloggers and I have really enjoyed reading this post. I'm impressed at how you manage to find so much information on insects, where I always seem to find a dearth.
Your stuff about sexual mimicry is intriguing. I have puzzled over St. Mark's Fly before, and the male's courtship flights dangling their legs at the females. (http://standandstare-nyctalus.blogspot.com/search/label/St%20Mark%27s%20Fly)

It certainly is an energy sapping behaviour and I wonder if they have 'sexual mimicry' too in their bag of tricks? Trouble is I have found it really difficult to find any references that get to this level of detail even though this is a common enough fly.

Many thanks for the encouragement.I've added links to both your sites on my main page.

Nyctalus: I've noticed St. Mark's flies in my garden also which means at some point I'll need to investigate them. If I turn up anything interesting, I'll let you know.

Great Henry - I'll look forward to that. Just in case you haven't caught up with it - Phil Gates has started the ball rolling with an excellent post on Bibio at http://beyondthehumaneye.blogspot.com/2010/05/four-eyed-fly.html
Allan