Autumn has arrived in the UK. The leaves are dropping from the trees and the wet weather has created puddles of rain water and detritus in my garden. Hoping to investigate the life therein, and having a cheap plastic fish tank to hand, rather than stand outside getting wet I decided to bring a puddle inside. It makes rather an attractive room feature don't you think?! (Photo 1). 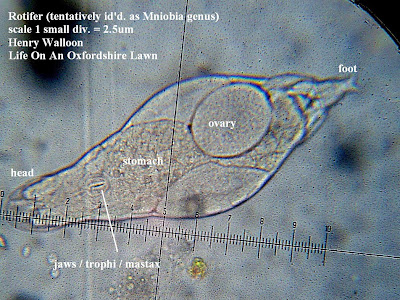 Photo 1 shows one of the inhabitants: a rotifer.

Rotifers have long been a favorite of amateur naturalists. Under the microscope they have instant appeal. Take a drop of pondwater and you'll find smaller creatures swimming around (algae, protozoa, fungal spores...) but all tend towards the 'minimalist', typically a single, roughly spherical cell. Rotifers by comparison have a true multicellular body. The amateur gets to search for eye spots, 'buccal tubes', kidneys, ovaries... add to this the wonderful, whirling 'wheel organs' at the front of the head, setting up eddies in the water and dragging hapless prey into the mouth and onwards to the tiny but perpetually snapping jaws ('trophi'), and you have a recipe for many hours of fascinating microscope viewing. In photo 1 I didn't manage to capture the 'wheel organs'. There are some virtuosic photos by Charles Krebs here. Ultimately however there's no beating moving images, these being a fine example. 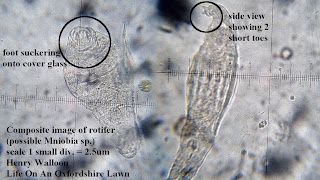 When it comes to identifying my rotifer I don't have any dedicated books. I did find a basic key in my copy of Microscopic Life in Sphagnum (Marjorie Hingley, Richmond Publishing) however. Some of the features of importance for rotifer identification include the presence of any hard shell ('lorica') and the presence of any eye spots. Mine has neither. The foot is another important feature. My rotifer crawled around 'inch worm' fashion beneath a microscope cover slip and obligingly gave me the views in photo 2. The labelled features point to my rotifer being in the genus Mniobia. As always, I'm happy to have any reader correct me.

The professionals too have given their attention to rotifers. One feature that has provoked serious study has been rotifer sexual reproduction. For many rotifer species, males are very rare. For some, no male has ever been found. How and why rotifers accomplish this, when almost everywhere else in the animal kingdom evolution has rendered reproduction reliant on two sexes, has been actively researched. I considered making this the topic for today's posting. I decided instead however to talk about some experiments into rotifer populations by a Professor Gregor Fussman and colleagues (very helpfully Prof. Fussman has made his all papers available online here).

Biologists have long been interested in trying to model the dynamics of populations. Suppose an isolated island starts out supporting a population of, say, a hundred rabbits and ten foxes. Biologists would like to be able to predict how many foxes might exist on the island a certain number of years into the future. The non-mathematically-minded amongst you (the others might want to skip this bit) might be puzzled by the meaning of the word "model" in the sentence before. Basically it means this: Take a pen and paper. In the middle of your page write an equals sign ('='). On one side of the equals-sign write a letter ('f' say) to represent the thing you're trying the predict (here, the rate at which the fox population is changing). On the other, write all the stuff you guess 'f' depends on - for instance, one might guess the size of the fox population would depend on the size of the rabbit population, the breeding rate of foxes, the old-age-limit of foxes etc. Finally, take the equation you've by now written down, and stuff it into a computer (i.e. tell the computer to plot a graph of the fox population over time using your equation). Of course there are many subtleties and details in order to do this sort of thing well, but in principal at least that is how population models are done.

Rather than 'foxes', Fussman and colleagues set out to model a population of rotifers (Brachionus calyciflorus). The rotifers were feeding on algae ('the rabbits') called Chlorella vulgaris not unlike the alga I blogged here. Rather than an 'isolated island', the environment was a 'chemostat' which is basically a fancy fishtank with tubes in and out in order to controllably input and extract nutrients for the algae to feed on ('grass for the rabbits'). Fussan and team wrote down a set of equations they presumed took account of all the factors that would influence the population growth of their rotifers and fed their euqation into a computer. When the computer results were compared with real life however, they got a surprise: The predictions of their model were in gross disagreement with experiment.

In a textbook example of the scientific method the investigators set out to track down the 'missing ingredient' from their equations. The answer, when it was found, was sufficiently surprising and profound to ensure its publication in the prestigious journal 'Nature'.

The hidden factor influencing their population experiments could be summed up in a word: Evolution. This was a great surprise. After all, the effects of evolution are only 'supposed' to show themselves only over millenia. Evolution doesn't go around dominating the behaviour of fishtanks over a period of a fortnight, right!? What was going on? The answer was subtle: It turned out that the algae in the chemostat occurred in two subtly different forms - the species existed as two clones (I'll call them 'A' and 'B' here). Although only a little different, it transpired that rotifers were unable to 'go forth and multiply' when feeding on one of the clones, 'A', but could happily do so when feeding on the other ('B'). When a population of predatory rotifers was introduced to a population of algae, at first there would be plenty of both types of clone. The hungry rotifers would start to feed on the B's and the rotifer population would grow. Simulataneously, the population of 'A' algae would also grow as they carried on reproducing, free from predation. By contrast, alga B's population would fall, not only because they were being eaten up by rotifers, but also because the bugeoning population of 'inedible' A's was using up an inreasing amount of the tank's nutriants. Eventually the population of 'B' could crash to zero...

...And there it was: Darwin's famous "survival of the fittest" acting on a small difference between two sub-species so as to drive one to extinction in mere weeks!

Actually, my explanation above is oversimplified. In fact the B's didn't always disappear. Sometimes, it was the rotifers whose population would crash as they ran short of food as the B-algae became scarce. The disappearance of predators would then give the 'B' algae the chance to recover. Rather than complete extinctions, the experimenters often observed more complicated oscillations in population sizes in their tank therefore. Nevertheless, once suitably analysed, the conclusion was the same: Evolution was a powerful force at work in their system.

The implications of this discovery for biologists seeking to model important systems may be very large. If evolution is a driving force for the dynamics of algae in a fishtank on short timescales, is it also an important, fast-acting player in such vast and critical eco-systems as the oceans' plankton food chains?

I don't know the status of this last suggestion. I do know however that these days a humble puddle in my back garden evokes a new fascination. Hoorah for natural history!
Posted by Henry Walloon at 12:43 PM

Wow. Very detailed list with a number of sites that I have not seen before. Great work and thanks so much for sharing with everyone.
Dentist in Battersea