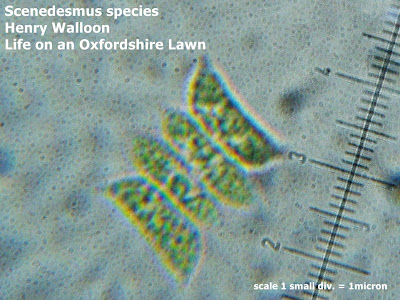 Some time ago I wrote about a puddle I spotted in my garden. Of course, I bought it into my house in a fishtank (doesn't everyone do this with their garden puddles?!).  It was only last week, nine months on, that I finally returned it to the great outdoors. Amazingly it was still brimming with microscopic 'pondlife', although it had become rather choked with the 'sludgy' cyanobacteria I wrote about here.

Over the months I repeatedly examined my puddle under the microscope. Photo 1 shows one of the lifeforms I found.  This one was rather common in the early days, but later seemed to disappear.

Spot something tiny and green under the microscope and its either algae or cyanobacteria. Cyanobacteria tend to be featureless, lacking detailed internal structure, notably a nucleus. The cells here have nuclei however, helping to identify them as algae. (The nuclei don't show up very clearly in photo 1 but by squinting I think you'll be able to see the spherical features towards the centres of the upper three cells).

Turning to my (borrowed) copy of the hefty "The Freshwater Algal Flora of the British Isles" (John, Whitton, Brook) - a 700-page light bedtime read! -  I was able to identify my algae as a member of the Scenedesmus genus. Characteristic features are the obviously 'pointy' crescent shape. Also, although I occasionally found single, isolated cells, very often I found 4 (as here) or 8 cells together (about which more shortly...).

Scenedesmus algae are part of the Chlorophyta (= the green algae). They are all freshwater. According to the book above as many as 200 different British species have been reported. However, it's been found that individuals from a species can grow into a variety of different forms as a result of different environmental stresses, so there's suspicion that many of these 200 'species' may not be unique. Furthermore the authors explain that recent scientific studies powered by advances in electron microscopy and modern-day biochemistry are pointing to a need to significantly rethink the traditional classification of many species. (This is happening everywhere in biology these days - see my posting on mushrooms here for example). All this means that although the authors give a key to the 42 British species of Scenedesmus algae they recognise, I've not attempted to pin down the species-identity of mine.

As I've said many times, I'm rarely disappointed when it comes discovering that there is some fascinating or unusual feature in the lifestyle of any creature I come across. Turning to my copy of R.E.Lee's Phycology (a present Christmas-last) it turns out that the fact I frequently saw 4 or 8 algal cells together was no accident.  If Scenedesmus is grown in a tank free from predators (such as grazing water fleas) it grows as single isolated 'unicells'. (If you're an algal cell wanting to maximise the amount of sunlight and nutrients reaching you its preferable to keep your distance from neighbours who might otherwise shield or shadow you). However, introduce some predators into the tank and, amazingly, Scenedesmus cells switch to growing in small groups as an anti-grazing defence! In the jargon, a group is known as a coenobium. Some groups also grow long spines, although interestingly the book implies that these are flotation devices to help the colony stay in the light, rather than anti-predator devices per se. The algae are able to detect the presence of predators by detecting chemicals ('infochemicals') in the water that leach from the digestive tract of the predators. Another of nature's tiny miracles!
Posted by Henry Walloon at 1:46 PM

As always, a fascinating and well researched post.
I for one, will be treating puddles with more respect in the future.

Great post and some really useful tips there. I love resource lists like this. Have social bookmarked it in the hope that others can also benefit.