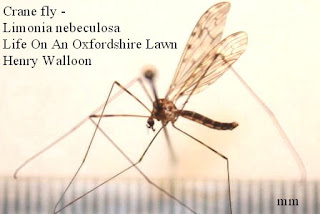 My garden, along with the rest of the UK, is currently buried beneath a thick blanket of snow. Aside from a collection of tits on my bird feeder there's little sign of life. For this posting therefore, I'm falling back to a photo of a crane fly I took in summer (photo 1. Click on photo's to enlarge). Dozens of them swarmed out from amongst some garden ivy I happened to disturb at the time.

I know almost nothing about flies (diptera). Along with beetles, ichneumon wasps and various other orders of insect however, they strike me as offering rather "good value" to any amateur naturalist keen to make a genuine contribution to science since a) there are very large numbers of them (15,000 species of fly in Europe alone) b) they can display a rich and complex behaviour (see my posting on P. nobilitatus for example) and c) for countless species almost nothing is known. Take hoverflies for example. After hundreds of years of intense study by armies of naturalists there can be few countries in the world whose natural history has been so well catalogued as Britain's. Further, there are few flies as conspicuous as hoverflies. Yet even for these, a staggering 40% of the larvae of the 265 British hoverfly species of are simply unknown. In the U.S. its 93%. (This, at least, was the situation persisting in 1993 when my copy of 'Colour Guide to Hoverfly Larvae' (G.E.Rotheray) was published). Anyway, we're not here to discuss hoverflies. On to the star of today's show...

What makes a crane fly a crane fly? Well, firstly flies (=the order diptera) are separated from 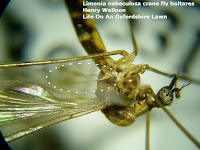 other insects by the presence of two vestigial wings called halteres. I've ringed these in photo 2. Next, the order diptera is separated into two sub-orders of flies called the nematocera and the brachycera. The split is based on the structure of the antennae - the nematocera all have long, thread-like antennae with more than five segments. You can see this in photo 3. The sub-order nematocera gets further subdivided into more than 70 families of fly, the crane flies amongst them. If you want a fuller flavour of how these families are separated, the redoubtable Field Studies Council has made a key to the families of fly by D.M. Unwin freely available here. 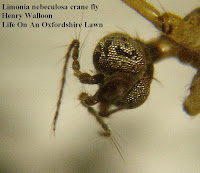 It used to be that all crane flies were clumped together in one family called the Tipulidae. At some point however it was decided to split this family into four, the Tipulidae, Pediciidae, Limoniidae and the Cylindrotomidae. I read on the (searchable) Catalog of the Craneflies of the World that worldwide there are more than 10,000 species of Limoniidae, 4000 Tipulidae nearly 500 Pediciidea and 70-odd Cylindrotomidae. Separating these families is a tricky job. To complicate matters further, recent DNA studies [2] are casting doubt on the very existence of the Limoniidae as a family.

The whole thing is rather confusing for the amateur (=me!) and for a long time whilst preparing this posting I despaired of being able to identify my crane fly. Fortunately, rescue was at hand in the form of an excellent set of test keys from Alan Stubbs I found on the Dipterists Forum website.

Before discussing these keys I need say something about how dipterists characterise the wings of flies: An influential theory, originally due to Comstock and Needham in the 1890's, is that way back in prehistory, a first primeval insect wing evolved. Exactly how this first wing appeared is still uncertain but a current theory [1] is that it evolved from the multi-branched external gills seen on the larvae of some aquatic insects such as mayflies. The veins in insect wings are hypothesised to be modifications of these gill 'tubes' (trachea). Anyway, assuming the existence of this ancestral wing, Comstock and Needham named the veins in it the Costa (C), the Radius (R), the Media (M), the Cubitus (Cu) and the Anal veins (A). As these veins fanned out through the ancestral wing they forked. So, for example, the radius vein, R, is supposed to have forked into five sub-veins called (logically enough) R1 to R5. No modern fly has retained all the veins of the ancestral wing, over millenia evolution has caused different families of fly to lose different veins. Which veins a fly has retained however is a very important clue to its identification. 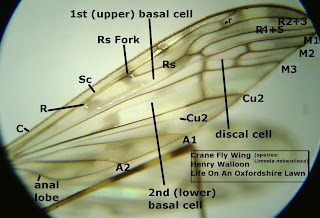 Photo 4 shows the wing of my crane fly labelled up with the help of Alan Stubbs' keys above according to the Comstock Needham system.

There was one more piece of information I needed, namely whether my crane fly's palps (=little facial apendages) were long or short. Photo 5 shows they're short.

Armed with this information I was finally able to identify my cranefly as Limonia nebeculosa. Final 'clinchers' were the presence of 3-coloured bands on my fly's femurs (enlarge to see these in photo 1) and the sort of smudgy 'hoop' on the wing I've delineated with the dashed white line in photo 4. 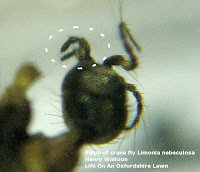 Today's posting was a bit technical in places but I am pleased to have identified my first fly to species level. Only another 250,000 to go!

Another excellent post and you have done considerbly better than me in identifying a crane fly.
The link to Alan Stubbs site is most interesting, but I don't think I'll be able to match your detail in identification - I don't (yet) own a microscope and I have a phobia of crane fly so I doubt if I'd ever be able to look at one in such detail.
So how long do you think it will be before you discover something completely new?

Good to see you hear again.

To discover a species wholly new to science is certainly possible. I mentioned J. Owen in my posting on Ichneumon wasps who found four new wasps in her 1970's garden study. It's certainly non-trivial in the British Isles however. I imagine the most likely approach is to specialise in one of the more species-rich lifeforms such as mites or microfungi. A problem for the amateur is to be really confident there's not some obscure paper somewhere that already describes any critter you think you've 'discovered'

More likely for I think is to either

a) Be the first to spot some new-for-the-UK species. This is happening fairly frequently these days with global warming. (Harlequin ladybirds to take but one example)

Or, b) be the first to observe some interesting behaviour/ecology for some lifeform.

A new species would be nice(!) but actually I think it's the latter I'd take most satisfaction in.