I am an amateur naturalist trying to learn something about everything that lives in my garden. 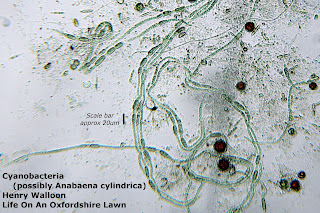 Some of you may recall that in a recent posting I bought a puddle into my house (it was in a plastic fishtank!). Well, I've hung on to my puddle. Indeed I've been periodically topping it up with fresh puddle-water and inspecting its inhabitants under my microscope. Photos 1 and 2 show two such 'denizens of the deeps'. No, not frog or toad spawn. The scale is all wrong for that. Twenty of the larger spheres in photo 2 for example, would sit side-by-side in 1mm. In fact these are of colonies of blue-green algae (cyanobacteria).

Cyanobacteria are some of the most ancient lifeforms of all. Their microfossil record goes back 2.7 billion years. What I have learnt about them has been mostly through reading a new book - Phycology (=the study of algae) by R.E.Lee (CambridgeUni. Press) - which Santa very kindly delivered to me recently. 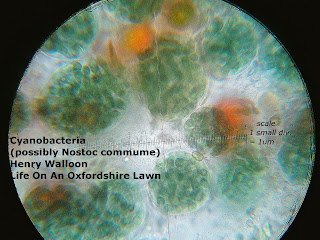 Today such photosynthetic 'slavery' still persists in the lichens. About 10% of lichens use cyanobacteria to do their photosynthesis (the other 90% use algae).

Photosynthesisis is not the only chemical magic that cyanobacteria have mastered. They are also able to 'fix' nitrogen - that is take nitrogen gas from the air and turn it into an amino acid (glutamate). No higher plants or animals can do this, and a range of plants have formed symbiotic relationships with cyanobacteria to take advantage of this ability. Some plants have special nodules on their roots to house colonies of cyanobacteria. The water fern Azolla has cavities in the leaves. According to the book above, nitrogen fixation by cyanobacteria also plays a fundamental role in keeping the world's 100million square km of paddy fields fertile in areas where otherwise farmers would be too poor to nitrogen-fertilise the soil.

The twin ability of cyanobacteria to remove nitrogen and carbon dioxide from the atmosphere had a profound affect on the earth's early climate. Over eons, cyanobacteria, as the dominant lifeform at the time, transformed an ancient atmosphere rich in CO2 and almost devoid of oxygen into the one we breathe today. A glimpse of what the ancient earth might have looked like can be seen today at Shark's Bay in Australia where warm and salty waters limit other forms of life and allow cyanobacteria to dominate and grow into large, rocky (actually calcium carbonate) colonies called stromatolites - see photo 3 which I'm using under the terms of the Wikimedia free licence. Stromatolites grow slowly and exhibit 'growth ring' like features. Analysis of these has allowed scientists to determine that for example, 1-billion years ago the earth's year comprised 435 days [1]. 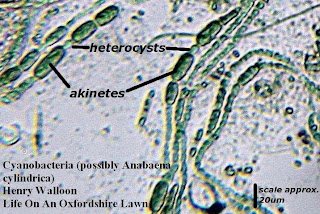 So, how do you set about identifying the species of a cyanobacterium? The answer is: with difficulty! Like so many areas of biology at present, DNA analysis is over-turning a lot of old species definitions. Things are further complicated by the fact that the appearance (morphology) of a specimen of a cyanobacterium can depend strongly on the conditions in which it has grown. Nevertheless with a little patience it's possible for the amateur (me!) to make a little progress. I've also been fortunate in having been able to borrow a copy of the hefty The Freshwater Algal Flora of the British Isles (Whitton and Brook). Firstly you need to know you're looking at a cyanobacterium. If the cells you're examining show any significant internal structure (especially a nucleus) then it's not a cyanobacterium, and is instead a true algae. Next one needs to take careful note of the detailed shape of the colony. For example, if your cyanobacteria exhibit chain-like growth its important to note whether the filaments branch, whether or not they taper towards the ends and whether or not the cells are encased in any sort of slimy envelope (as they are in photo 2). These features help separate the main genuses. Finally, it's important to note the presence and form of any heterocysts and akinetes. I've labelled these in photo 4. Heterocysts are specialised, largely colourless cells that carry out nitrogen fixation. My impression from the textbooks is that the role of akinetes is a bit of mystery. They have reduced photosynthetic ability and seem to be involved in food storage. Anyway based on these features and Whitton and Brook's book above I'm tentatively identifying my cyanobacteria as Anabaena cylindrica and Nostoc commune. As always I'm happy for anyone out there to correct me.

Finally, one of the most amazing things I learnt about cyanobacteria is the way in which some of them achieve movement. Some species develop tiny gas bubbles (vacuoles) inside the cells that help them float upwards in water to receive more sunlight. More fantastically some species can undertake a form of movement known as gliding. Here the surface of the cells is sculptured in a series of grooves. The grooves may spiral around along a chain of cells. The cell pumps slime into the grooves through tiny pores. If a chain of cells is close to a surface, the flow of slime pushes against the surface and causes the whole filament to glide along over the surface at up to half a mm per second. Hooray for slime power!

We would like to know how to get it off our gravel driveway. It is taking over a very large area and is very slippery. We tried burning wkth propane torch and after a rain it has not come back ....yet. it has been one day since rain. Since it will run off into a gorge that empties into a neighbors pond I am sure he too will benefit.

I had a fascination with spiders ever since my childhood and I think it's mostly because of the Spider-Man cartoons that is why I love to read about them, thank you for posting.