I am attempting to identify all the life in my garden. Today's posting: ivy.

Rather naively, I had not expected to find a great deal to say about the English ivy (Hedera helix). How wrong I was!

Having spent a few days investigating this wonderful plant, I am beginning to think that of all the life forms in my garden, it may be the one most steeped in history. 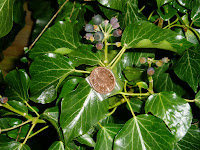 Ivy seems an established plant around the globe. In case anyone isn't familiar with this remarkably successful and resilient evergreen plant, photo 1 (click on it to enlarge) shows a closeup of some of mine. (For those of you following, the ivy in my garden grows at (0,2) and (2,0) (see here )) I'm fairly sure mine is the true, indigenous, English ivy. There are numerous commercial
cultivars.

The number of berries on a stalk is variable: I have counted as few as four and as many as thirty. 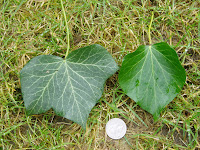 Despite having noticed ivy on innumerable occasions during country walks, I confess, until now I had never really looked at it. I had not hitherto noticed, for example, that the leaves on an ivy plant come in two basic forms: Those on non-flowering ('non-berry') branches have the classic "ivy leaf" (palmate) shape (photo 2, left). By contrast, those on flowering stems tend be be more uniformly ovate (photo 2, right). I cannot imagine what evolutionary advantage the plant can get from this? 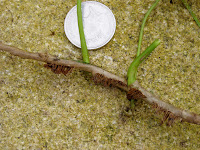 Ivy's famous ability to climb up trees and buildings is effected by numerous small clinging ("adventitious") roots that sprout from the climbing stems (photo 3.). There seems to be some debate over whether ivy harms its host tree - something it is often accused of. I'm not qualified to comment - though I welcome the comments of readers.

This site argues that ivy is increasing its prevalence in Britain.

Ivy it seems, is much valued by wildlife. Unusually, ivy berries ripen over the winter. By February they are amongst the few berries available to birds, and are eaten by (amongst others) blackbirds, thrushes and pigeons. The dense foliage is a favourite hiding place for small nesting birds - a fact I can attest to: in the course of my 'prodding around' in my garden's ivy I found no less than four old, discarded nests.

Ivy seems capable of inducing a variety of unpleasant medical conditions in humans, but by contrast, is a favoured food of the caterpillars of the Holly Blue butterfly, seems to have been an important animal fodder in Mesolithic Europe, and even gets a mention in Shakespeare:

"...They have scared away two of my
best sheep, which I fear the wolf will sooner find
than the master: If anywhere I have them 'tis by
the seaside browsing of ivy"
(The Winter's Tale, Act III Scene III)

Ivy has had a long association with alcohol. According to my Brewers Dictionary of Phase and Fable it is dedicated to the Roman god of wine Bacchus (though there seems some doubt as to whether his is the same plant as English ivy). In consequence, it was hung above the entrance of Roman wine sellers (Bolton, J. American Folk-Lore, vol. 15, pp.44, 1902) to advertise their wares .

"You need not hang up the ivy bush over wine that sells well"
(Piblius Syrys, 45BC)

a quote later "recycled" by Shakespeare:

"Good wine needs no bush"
(As You Like It: Epilogue)

a reference in turn to the habit of decorating a pole (the 'ale-stick') with foliage (often ivy) to advertise a tavern in Britian. "The Ivy Bush" (or something similar) is still a common pub name.

Ivy has a long history of symbolism in the Christian and pre-Christian church, a familiar example of course being the Christmas carol 'The Holly and the Ivy' ("But do you have holly in your garden?" I hear you cry...watch this space!).

According my Brewer's dictionary:

In Christian symbolism ivy typifies the everlasting life, from its remaining continually green.

I have come across so many discussions and interpretations of ivy's symbolism in Christian and pagan religion on the internet however, that I've become unclear over the distinction between fact and speculation.

I'll end this posting by mentioning three sites that that I was surprised and amused to discover:
Firstly, an ivy society ; Secondly, a blog devoted entirely to the plant(!) ; and thirdly, one of the quirkiest horticultural sites I have yet encountered.

My garden gets more interesting every day!
Posted by Henry Walloon at 8:18 PM

Great work you're doing here! I feel like everyone should know the species in their area--at the very least in their back garden! In case you are interested, here's my entry on ivy:

Nice to make your acquaintance!

You've documented nearly 400 species I note. Seems I've got some catching up to do!

Unlike Vivienne Mackenzie, I'm not convinced that ivy does significant harm to trees.

A heavy growth of ivy may hasten the fall of trees that are already diseased and dying, but I don't believe that a healthy tree can be killed by ivy.

Ivy growing on the ground is a different matter. I've come across situations in which it appears to have shaded out the other ground flora. However, this seems to occur most frequently in disturbed urban woodland, where other factors may come into play.

Many thanks for the comment (I enjoyed your blog incidentally).

I don't know Mr Mackenzie myself and can't speak with any expert knowledge on this matter.

He seems to be making two points

1) Ivy will habitually kill its host tree.
2) Ivy is increasing

I enjoyed his article, and though (as I say) I don't know the true answer, a puzzle for me if '1' is true, is that ivy has been with us for thousands of years. Yet we have a great many trees in the country. Why haven't they all been 'wiped out' long ago?

With regard to '2' I can well believe that English ivy in the US (where perhaps it has few natural enemies) is a menace. Over here however, once again ivy's status as a 'long time resident' has ensured it has its fair share of predators. If ivy is temporarily expanding its range, I would have some faith in nature's ability to restore the balance. I read somewhere for example, that Britain's Holly Blue butterfly population is currently increasing - perhaps this is in direct response to the spread of ivy and in time will restore a balance it. Or perhaps not!

Anhyow, I've emailed Mr Mackenzie. Perhaps he'll make a comment of his own.

According to Oliver Rackham, the mistaken idea that ivy kills the tree it grows on can be traced back to Theophrastus in the fourth century BC (Trees and Woodland in the British Landscape).

Ivy is an epiphyte rather than a parasite.

I copy urbpan: great work you're doing with this site! Thank you for mentioning my blog and asking a question ('how does ivy benefit from having different shaped leaves on flowering and non-flowering plants').
Unfortunately I can only make a guess.

In short: ivy branches in the shadow of trees grow so called juvenile leaves. This is what you call 'non-flowering plants'. These leaves have sharp sinuses useful for trying to find a hold. When those branches reach the forest canopy something (it has something to do with hormones) happens. The branches start to grow so called adult leaves. This is what you call 'flowering plants'. These leaves have shallow sinuses useful for collecting sun rays.

Me, Myself and Ivy