I am attempting to identify all the life in my garden. In this posting I am continuing to work my way through my garden's moss species. As I've mentioned previously I'm an amatuer with no formal training in botany or biology. All my "identifications" (a.k.a. best guesses) come with this caveat! 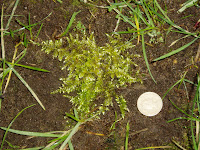 Photo 1 shows a patch of moss I found growing on my lawn at (1.1,0.3) (see the Lie of the Land posting). I'm mildly curious to know how fast moss grows and spreads so I've measured the size of this patch - 9cm x 9cm at the widest point - with the aim of returning to look at it again in a years time (watch this space!). Photo 2 shows a microscope photo of one of the leaves. 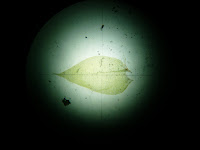 describes it as 'almost ubiquitous in lowland districts' 'often found on lawns' and 'amongst the first mosses which the beginner will come to know'; So it seems a useful one to have identified!

Meanwhile, growing on the trunk of my apple tree (1.5,1.1) (of which, more in a future posting) is the moss in photo 3. The leaves of this one (shown in photo 4) are distinctly narrow, 'creased' with folds, and have tiny 'teeth' along the edges being most pronounced at the base of the leaf. My identification for this one is Camptothecium sericeum (Silky wall feather moss) which seems to have be 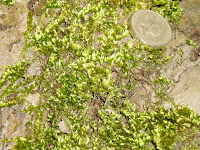 renamed since Watson's book was published in the 1950's as Homalothecium sericeum.

I have frequently read that mosses are 'non vascular' plants i.e. that they lack a dedicated 'plumbing' system for transporting water and nutrients around. Given this explanation, what puzzles me (comments please!) is how in that case they do manage to transport nutrients around. Are moss leaves constrained to be as small as they are by this lack of a vascular system? 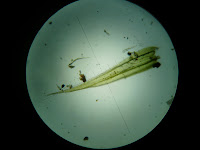 Posted by Henry Walloon at 7:15 PM