I am an amateur trying to identify all the life in my garden. Today, my first invertebrate: a snail. 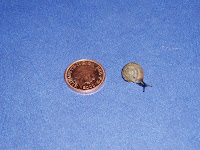 Photo 2 shows a view from "the rear".

To learn something about snails I have been reading Land Snails of the British Isles, A.A. Wardhaugh (Shire Nat. Hist., 1989). Based on a very similar photo (to my inexperienced eyes at least) 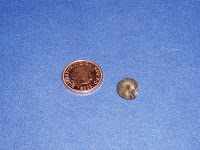 in this book, I believe my snail to be the Strawberry snail Trichia striolata, so-called as apparently it can become a pest on strawberries.

In reading the book above, I have been struck by just how curious an animal the snails is. A typical creature from a science fiction novel is far more mundane! Firsly there is the familiar means of locomotion: on a trail of slime. Next, the eyes-on-stalks (though it seems the latter is a feature only of the sub-class of snails, the pulmonates - the majority of British land snails. By contrast, the eyes of the (typically marine) prosobranch snails are located at the base of the stalks).

For the non-experts, I suspect a less familiar aspect of the snail's anatomy will be the shape of the snail's alimentary tract. This extends from the mouth, back into the body but then proceeds to curve round in a U-bend "(" shape to bring the anus out on top of the body, just inside the shell, at a point above the snails head. It never rains but it pours!

Finally, there are the mating habits of snails. Snails are hermaphrodites possessing both male and female genetalia. This would be odd enough, but snails have one more truely bizarre facet to their behaviour: in readiness for mating a number of snails prepare a 'love dart' - a sharpened dart of calcium carbonate (see here for some photos) - in a bodily organ known as the dart sac. During copulation the love dart is extended and then physically driven into the body of the partner, often to remain there to be internalised. An early theory to explain this phenomena was that it might be a 'gift' of calcium from one snail to the other. It seems the love dart is now thought to play a role in triggering a fertility-enhancing hormonal response in the 'punctured' snail. I cannot imagine the evolutionary value of going to such extreme lengths however (as opposed to a more 'traditional' approach to mating - exchanging pheromones; employing a mating dance; buying champagne etc. ?)

To be strictly accurate, I should say that although I have come across one paper (Koene, Muratov, Malacologica 2004, 46(1): 73-78) which refers generally to love darts in the Trichia genus, I have not been able to ascertain for certain that T.striolata in particular has a one (can anyone tell me?). Indeed, other than learning of its status as a common snail in Southern England and its fondness for strawberries, I have not been able to find very much at all specifically relating to the habits of T. striolata. My searches have mostly turned up the usual selection of subscription-only papers in online scientific journals (something always a point of irritatation to me since, fairly or otherwise, I feel as a tax payer I already make my contribution to UK university research. I don't begrude the contribution, but can't quite understand how the research results can come to be 'owned' by private publishing houses. Rant over!).

I can't answer your question about T. striolata but here's a post I wrote a while back about some eye-opening research on darts.

Thanks for the link!

I often find nowadays that authors keep 'copies' of their journal papers on personal websites. Putting the complete title into Google has sometimes turned up previously inaccessible papers. Good luck.

I thought it was an excellent blog, that information has been very helpful in my life, I am a strawberries lover, so I really enjoyed this reading, the strawberries taste is so delicious! Thanks for this great moment!